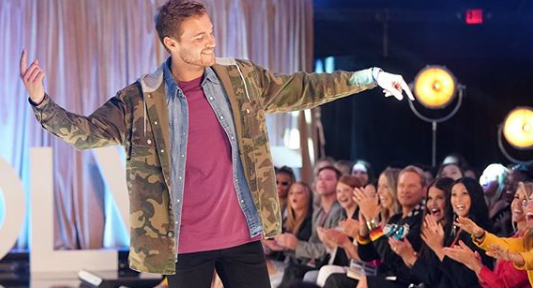 After Peter Weber’s cliff-hanger with Hannah Brown fans wondered if she was going to stick around. Peter even went so far as to ask her if she’d maybe move into the house with her. Fans had a lot of emotions about this taking to social media. Some wanted her to leave him alone and let him find his love. Others were rooting for them to get back together.

Hannah said she let someone go who didn’t hurt her heart. Peter told her she was always the one saying no, he never said no to her. Every time he’s talked about Hannah he’s said his heart was really in it. He was deeply in love with her so seeing her so soon wasn’t easy for him.

Hannah Brown Joked About Peter Weber Leaving The Show With Her

They looked at each other for a long time after talking about their breakup. Hannah eventually crawled into Peter’s lap and it looked like they were going to kiss. Hannah kissed his forehead and he said, “I can’t do this.” He said he had to get back to the other girls and Hannah said she had a flight to catch. They embraced and parted ways. While she joked about him leaving the show with her, he wondered if her feelings were more about what-ifs. According to US Weekly, she admitted some of it was.

He said after he’d wanted to kiss her and the whole thing threw him. Ultimately, he decided he really wanted to be with someone who wanted him just as badly. Fans have speculated Hannah Brown’s role in his life might not be over, but they’ll have to wait until the finale to see what happens.

When he returned to the girls who’d been working on their stories, he still had glitter everywhere from Hannah’s dress. He even mentioned to Hannah it was all over his jeans. It didn’t look great to the girls waiting for him. Peter informed them after their emotional conversation he wouldn’t be able to go through with the date he’d planned. He needed time and was sorry. Some of the girls were angry when he said he’d see them for the after-party. They felt like they’d been cheated out of their time with him.

At the end of the group date, he gave the rose to Sydney, because he felt like she showed him her heart. He said, “Hannah B. is in the past.” However, some of the girls there and later some of the girls in the house were still questioning his readiness for love.