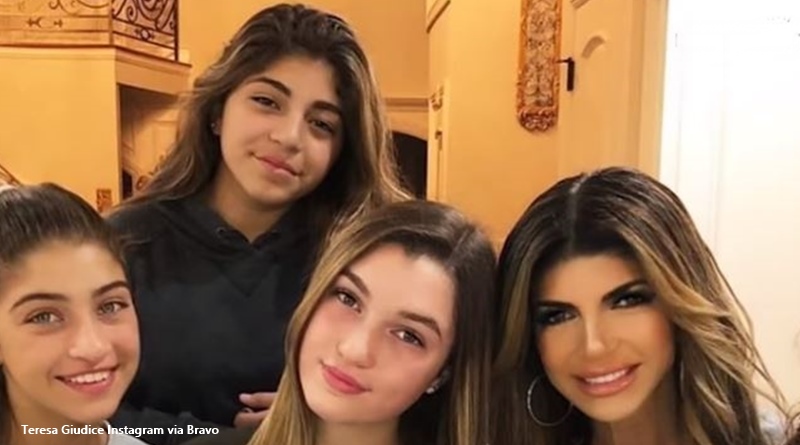 RHONJ fans heard that Teresa Giudice’s daughters went off to Italy to spend the holidays with their dad, Joe. On Saturday, Teresa shared a photo of them looking snug and warm in their jackets. But some fans think they wear fur and expressed anger about it. Others thought there’s nothing wrong with it and the tit-for-tat turned into an argument.

TV Shows Ace reported on Christmas Day, that “Gia, 18, Gabriella, 15, Milania, 14, and Audriana, 10 all happily greeted their dad after their transatlantic flight” to Italy. It looked like a happy family event. But for the girls, there’s probably some pain involved as Teresa and Joe split and it looks like their marriage’s over. Mind you, we also noted that the girls’ parents hardly spent any time together since Teresa went to prison in 2015.

The girls returned to the USA in time to celebrate the New Year with their mom, Bravo TV reported. Now, Teresa took to Instagram to share a photo of the girls in Italy. It looks really cold there, and, in the picture, fans noticed fur. The RHONJ star captioned it with, “Belissima Roma with my beautiful girls.” Plus she tagged it as Rome, Italy. Critics responded to the photo with some concern, but it turned into an argument between Teresa’s fans.

It didn’t take long for critics to voice their concerns over the kids apparently wearing fur. One critic said, “Hope they aren’t wearing fur! Teach them please.” Others agreed, and one said, “yup, I’m seeing Canada Goose on other posts.😢 her daughters are so beautiful but not a fan of those hateful jackets.”

In agreement, more forceful criticism came, and one person wrote, “Gia’s jacket is trimmed with wolf fur. Plus, a label on a garment that says synthetic hair used for trim can be misleading. Especially if the coat was made in China. That trim could be dog hair or cat hair.” They ended with, “Never buy anything that has some kind of fur trimming.” Other similar comments came from RHONJ fans, but others disagreed, which started an argument.

The fur argument stretched to being vegan

That comment generated more arguments between RHONJ fans about how eating and killing for coats differ. And, in fact, nobody knows for sure if the trimmings are actually faux or not. What do you think about Teresa Giudice’s daughters possibly wearing fur? Sound off your thoughts in the comments below.