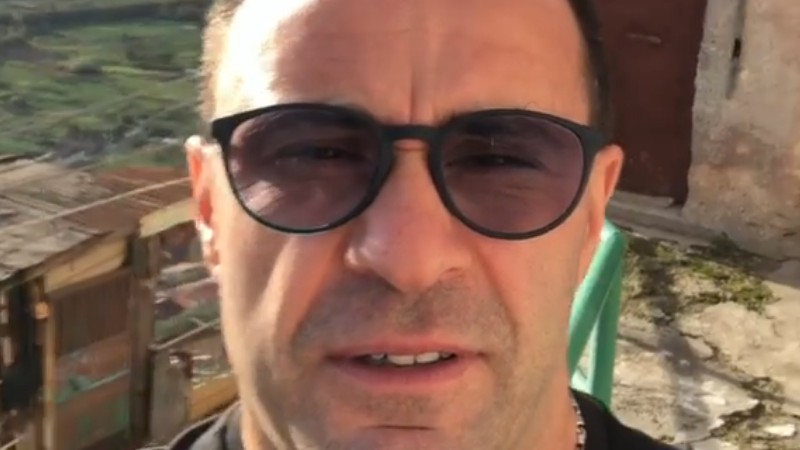 The Real Housewives of New Jersey’s Joe Giudice is having a Merry Christmas with his four daughters in Italy. The reality star posted a video on his social media of greeting his children at the airport.

Gia, 18, Gabriella, 15, Milania, 14, and Audriana, 10 all happily greeted their dad after their transatlantic flight.

However, one person who didn’t make the trip across the ocean is his estranged wife, Teresa Giudice.

Many outlets, including TV Shows Ace, reported last week that Joe and Teresa separated after 20 years of marriage. The childhood sweethearts have been separated one way or another since 2015 when Teresa started her short prison term.

Joe’s prison sentence followed directly after her release. After serving his term, Joe was transferred to ICE custody. The conditions of the facility were so bad, he chose to return to Italy while his deportation appeal continues in the U.S.

During his time in Italy, Joe has found work at a fish factory and continued his MMA training. Teresa and the former couple’s four children visited Italy over the Thanksgiving holiday.

People magazine reported earlier this month that Teresa decided not to accompany her daughters to Italy for Christmas because of work obligations.

The RHONJ dad was at the airport to await his daughters’ arrival from the States. A slimmed-down Joe filmed the happy reunion to share with his Instagram followers.

As his daughters enter the airport terminal after their flight, Joe rushes to hug them. “They are so cute so happy,” Joe wrote for a caption on the sweet video.

They are so cute so Happy 😃

In another video, Joe shows what it’s like having four daughters when he tries to fit their luggage into the car. Joe can be heard commenting about taking apart the car to fit the luggage.

We are going to have to take apart this whole thing. And we still got another three.”

Merry Christmas 🎄 packed to the gills

Joe was clearly joking. He welcomes them to Italy again before telling them, “I love you.” Who knew Joe was such a softie?

Judging by his Christmas gifts, the girls may have more excess luggage for the trip home. TV Shows Ace reported that Joe recently posted an array of Christmas gifts in Fendi bags for his “angels.”

When Teresa and her four girls visited Joe in November, the RHONJ cameras were there to caption the entire thing. ET shared a midseason trailer for the second half of Season 10.

During the reunion, Joe and Teresa contemplate ending their marriage. Earlier in the season, phone calls between the two reveal tensions.

Joe blamed Teresa for not pushing him to become a U.S. citizen. Their daughter Gia angrily confronted her mom for putting the family’s personal issues on the show.

While her daughters are in Italy, Teresa posted a cryptic message on her Instagram. The post is a meme with a saying about change.

They said I changed a lot. I said a lot changed me.”

Teresa has yet to comment on her separation from Joe.