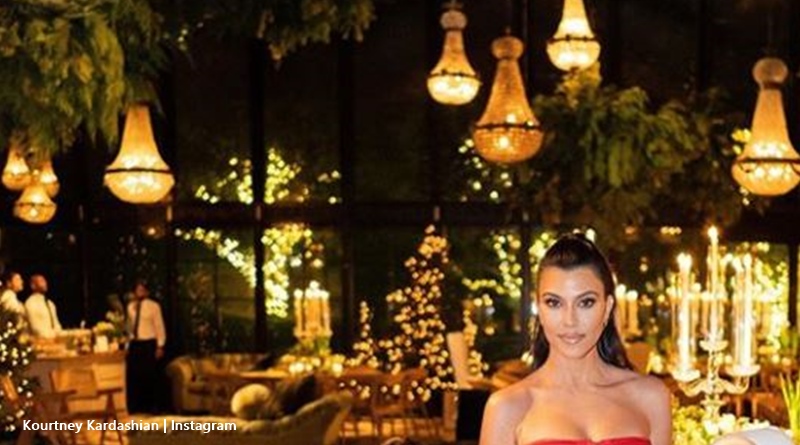 Kourtney Kardashian and her sister Kim love Christmas and Santa, and all the traditions that go with the season. While this year, Kim kept her home decor minimalistic, her sister splashed out nearly an estimated half a million on their Christmas party. But it’s a bit of a step-down, as in 2018, Kim laid out an estimated 1.3 million.

TV Shows Ace reported that this year, Kim and Kanye went minimalistic for their own Christmas. She loves present-giving but discarded the idea of wrapping paper. Instead, they used color-coded velvet material for gift-wrapping. For the decorations, she went with lights and “monochromatic trees in the hallway of their large mansion.” Even their annual Christmas card came over casual, with the family mostly dressed in their gray sweats.

But when it comes to the Kardashian clan’s Christmas party, the Kardashians lay out the cash and go over the top. This year, at just under half-a-million dollars, the bash came in well under 2018’s party. That party set them back around 1.3 million dollars, according to Yahoo Entertainment. They also noted that the 2018 party involved a “party tent that looked like a snow-capped mountain, and a ski slope (in Southern California) created just for the occasion.”

2019 brought a big step down in costs, but that doesn’t mean the Kardashians slummed it. Just under half a million dollars can still buy one big party. The outlet explains that experts suggest that the pot plants, (red poinsettias) and candles, plus the display setting probably set them back around $12,000. And that’s just the entrance decor. Meanwhile, a Christmas tree suspended inside the house probably took up another $1,300. And, literally, a “forest” of other fir trees added to those costs.

Next, they looked at the “custom tent” outside. Their experts suggest a price tag that also included the “clear siding, wood floors and lighting.” Possibly, with all the transport and labor, that could have totaled around “upwards of $50,000.” Kourtney Kardashian also arranged for chandeliers. Including them, the lighting budget probably accounted for around $25,000.  But we still don’t reach nearly half a million.

A large amount would have gone on the various furniture and fitting rentals. Plus, all the characters, some of them live. With the velvet sofas, retro wooden chairs, and faux mantel pieces, look at about $75,000. And the live characters doing their thing, singing carols and whatnot, probably put another ten grand on top of that. Throw in the food, cakes, gifts, and private photographer, and you get quite the entertainment bill.

Well, it seems although it got stepped down from 2018, a great time was had by all. With the fees to the event planners, it looks like Kourtney Kardashian forked out about  $436,300 for the evening. What do you think? Do you think that even a stepped-down budget still sounded like a magical Christmas party? Sound off your thoughts in the comments below.

Remember to check back with TV Shows Ace often for more news about Kourtney Kardashian.