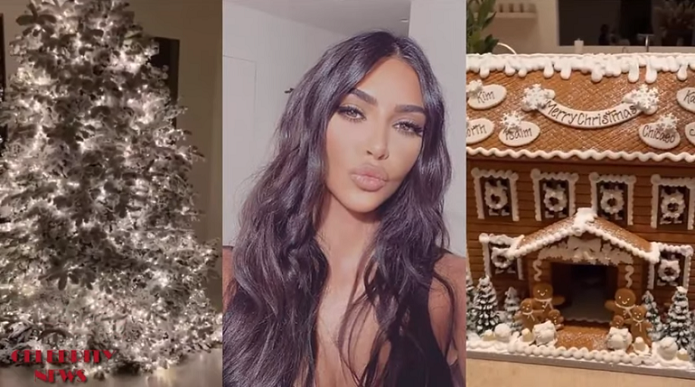 Kim Kardashian has been dishing on some of her favorite Christmas traditions. The Keeping Up With the Kardashians star unveiled her new gift-wrapping technique. Kim took to her Instagram Stories to share a photo of this year’s holiday wrap. The Kardashian-West family has a very serious approach when it comes to wrapping gifts.

Reality star says she has “a color and a vibe”

Kardashian took to Instagram Stories on Friday, Dec. 20 to reveal her unusual gift wrap. Instead of using traditional holiday paper, her family is using beige velvet fabric. In the post, the 39-year-old reality star said it makes it easier for everyone to tell who the gifts are from. That makes sense since Kardashian comes from a large family.

“West holiday wrapping this year!” she wrote. “Each year every family member picks a color and vibe so we know who the gifts are from. This year we chose creamy velvet.”

Earlier this month, Kim Kardashian revealed how she decorates her and her husband Kanye West’s Hidden Hills homes for the holidays. Their home is beige and minimalist in style, much like their gift wrap. It fits their current “vibe” for the holidays. According to the People report, Kardashian showed off monochromatic trees in the hallway of their large mansion.

She revealed that the trees are custom-made with plush fabric. She wanted to use them after she saw them at her family’s 2018 Christmas Eve party.

“I love these. They’re so whimsical, like Whoville, but all white,” Kardashian revealed on her Instagram Stories.

Kardashian also showed off her light display on her house as well as trees spray-painted white in her living room.

According to a report via Showbiz CheatSheet, she revealed on her eponymous blog back in 2009 that The Santa Clause always gets her in the holiday spirit.

She went on to reveal that the famous sisters used to watch The Santa Clause every year as part of their “tradition.” The Santa Clause is a 1994 Christmas movie that stars Tim Allen who accidentally injures Santa Clause and has to take over his role. Aside from The Santa Clause, Kardashian also enjoys watching A Christmas Story, Home Alone, How the Grinch Stole Christmas, and The Holiday.

Last week, Kim Kardashian took to Instagram to unveil her family’s annual Christmas card including all four of their children. In the photo, each member of the family is seen wearing gray sweats, except for West, who wears a white long-sleeved shirt. As previously reported via TV Shows Ace, Kardashian told Ellen DeGeneres that she actually Photoshopped North into the photo.

What are your thoughts on Kim Kardashian’s gift-wrapping technique and Christmas traditions? Sound off below in the comments section.

Check back with TV Shows Ace for the latest news on the Kardashians.