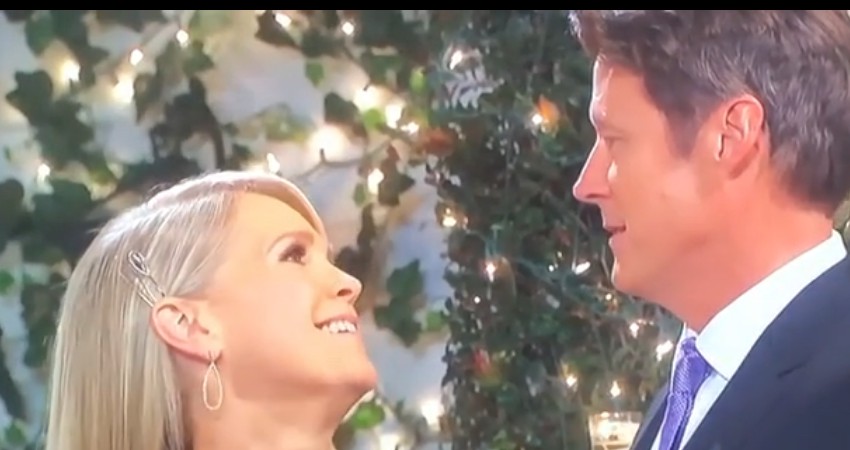 Nothing says love like a soap opera wedding. Extravagant, on-location weddings may be a thing left in the 1980s. However, Days of Our Lives still brought the drama and all the feels to viewers with some of the best weddings of the decade.

Here are TV Shows Ace’s picks for DOOL’s most memorable weddings of the 2010s.

Talk about an unlikely pairing. Maggie (Suzanne Rogers) leaned on Victor (John Aniston) after Mickey (John Clarke) passed away. At the time, Victor was married to Vivian (then Louise Sorel.)

Vivian felt threatened by Maggie and locked her rival in a crypt. Victor rescued Maggie and divorced Vivian.

Maggie eventually got the blessing from the Horton family and married Victor in 2011. Surprisingly, the two are still together.

Sonny and Will were a groundbreaking couple in several ways. The characters were the first gay supercouple on Days of Our Lives. Their 2013 wedding was the first same-sex marriage on any daytime soap opera in the U.S.

Will’s original portrayer, Chandler Massey, returned to the role shortly after the wedding. Will and Sonny briefly split, they remarried in 2017. However, Will is now in prison and the two agreed to divorce.

Sami (Alison Sweeny) and EJ (James Scott) have been off-and-on since 2006. During her long history in Salem, Sami has had 14 weddings, three of which were to EJ. Before wedding EJ in 2014, Sami married Rafe (Galen Gerig) twice!

However, Sami’s last wedding to EJ wasn’t a happy occasion. She found out prior to the wedding that EJ had an affair with Abby (Kate Mansi.) At the end of the ceremony, EJ was arrested for tax evasion.

Despite the betrayal, Sami grew closer to getting back together with EJ until he was shot and “killed.” In 2018, Sami found out that EJ was actually still alive and has been off-screen helping him recover since then.

She does return to Days of Our Lives from time-to-time. The actress revealed recently that fans can expect a brief return next summer. Louise Sorel is confirmed to be returning as Vivian around the same time.

Steve (Stephen Nichols) and Kayla (aka Sweetness) have been a Days super-couple since 1986.

A post shared by DaysOfOurLivesClassics (@daysofourlivesclassics) on Jul 26, 2019 at 8:33am PDT

“Patch” was presumed dead in 1990 after a boat explosion. However, at the time, eagle-eyed fans noticed Steve’s coffin was switched at the last minute.

Sixteen years later, Steve finally returned to Salem. He used sign language, as he did at their first wedding, to convince Kayla that it was really him. The couple remarried again in 2017, their third marriage. Unfortunately, they divorced during DOOL’s one-year time jump into the future in 2019.

At the moment, Steve is brainwashed into thinking he is Stefano DiMera. This week he crashes a New Year’s Eve party as Steve, much to Kayla’s shock.

Abigail is a legacy character on Days of Our Lives. She is the daughter of Jack (Matthew Ashford) and Jennifer (Melissa Reeves). Fun fact: Pretty Little Liars star Ashley Benson played a young Abigail.

Rivaling Sami for the most weddings of the 2010s, Abby has walked down the aisle five times. Three of those weddings were to marry Chad DiMera (Billy Flynn). After Abby developed a split personality, Chad threatened to have her institutionalized.

In response, Abby divorced him and immediately married his half-brother, Stefan DiMera (then Tyler Christopher). Stefan and Abby eventually split up. Abby reconnected with Chad. The two remarried in 2017 and moved to Paris.

Chad and Abby were featured on a Days of Our Lives digital series during their time in Paris but are now back in Salem.

John (Drake Hogestyn) and Marlena (Deidre Hall) are arguably the most popular supercouple in Days of Our Lives history. The couple first got together in 1986 when John thought he was Roman Brady.

The couple have survived numerous presumed deaths, affairs and shootings. John even stood by Marlena when she was possessed by the devil, one of the craziest storylines on Days of Our Lives.

A post shared by DaysOfOurLivesClassics (@daysofourlivesclassics) on Nov 30, 2019 at 11:33am PST

The couple made their seventh trip down the aisle in 2018. Princess Gina (Kristian Alfonso) recently tried to lure John away from Marlena, but John held strong to his “Doc.”

If you just thought, “Aren’t Tony (Thaao Penghli) and Kristen (Stacy Haiduk) brother and sister??”, you would be correct. The adopted siblings used Kristen’s ruse as Nicole to wed in 2019.

Kristen and Tony wanted to take control of DiMera Enterprises. Unfortunately, someone else had the same idea.

Gabi (Camila Banus) originally married Stefan to get revenge. However, the two ended up falling in love for real. Stefan was soon killed by Lani (Sal Stowers.) Gabi got her revenge on Lani, though…

Following the disastrous wedding, Lani ran away to Italy to become a nun. While there, she met up with Kristen, who also turned to religion after losing her baby. The two formed an unlikely friendship.

Lani and Kristen returned to Salem recently to reclaim their men. After being dumped, Eli found comfort in Gabi.

1986 was a banner year for soap supercouples on Days of Our Lives. Justin and Adrienne married on-location in Greece in 1987.

The couple left Salem in 1991. When Justin returned in 2009, he was separated from Adrienne. The pair divorced but eloped to Vegas in 2011.

Adrienne had an affair with Will’s father, Lucas (Bryan Datillo), in 2015. She divorced Justin to be with Lucas. Several reconciliations and splits followed.

In late 2019, Justin proposed to Adrienne. When Eli and Lani’s wedding blew up, two couples decided to get married in their place. Justin and Adrienne was one of those couples. It was revealed last month that Adrienne was accidentally killed the night of the wedding. Will is in jail for her death.

Days of Our Lives super-couple Jack and Jennifer – 2019

Jack and Jennifer figured the third time would be the charm. The super-couple joined Justin and Adrienne for their joint wedding ceremony. Unfortunately, their happiness was short-lived, as Jennifer was injured and fell into a coma after the wedding.

Another soap love story of the 80s, Jack and Jennifer’s iconic first wedding in 1991 was one of the last splashy weddings on Days of Our Lives.

#Repost @sheri_anderson_ with @get_repost ・・・ While I wasn’t on the show when these two were married, it’s one of those iconic couples – and weddings – that are still fan favorites! ⏳ #Days #jackandjennifer #mattashford #missyreeves #anniversary

The couple split up and got back together many times since their first meeting in 1989.

In 2012, Jack was presumed dead. He returned to Salem at the side of Eve Donovan (Kassie DePavia) with amnesia on New Year’s Eve, 2019. As fans know, Eve was Jennifer’s rival for Jack’s affection early in their romance.

Eve left town recently after Jack regained his memory and remarried Jennifer. However, Jennifer ended up in a coma after Princess Gina pushed her off a balcony.