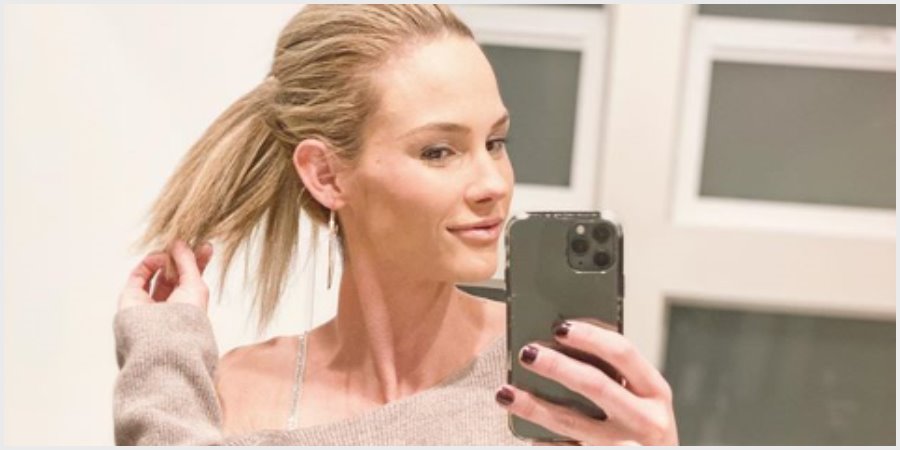 Meghan King Edmonds is in the middle of a difficult divorce with Jim Edmonds. There have already been accusations thrown on both sides of the battle. While she’s dealing with personal drama, there have been rumors circulating she may return to the Real Housewives of Orange County. She wouldn’t be the first former housewife to make a return after divorce or other major drama.

According to one report, her soon to be ex-stepdaughter had some things to say about her plans. Hayley Edmonds defended her father and posted a dig at Meghan on her social media. Jim Edmonds has four children from two previous marriages and three with Meghan.

What Did Haley Say About Meghan King Edmonds?

Hayley Edmonds shared a picture of her three-year-old sister, Aspen, and one-year-old twins, Hayes and Hart. Fans commented Meghan King Edmonds wasn’t in the photo. They also commented she lost so much in the divorce. That included losing her dream house.

Hayley responded to the fans. She said, “actually just so you know my dad designed, decorated and ‘dreamed up’ this house all by himself. It was his dream to be able to have all his kids here and thankfully we are all welcome now.” The last line was obviously directed at Meghan King Edmonds implying she didn’t make them feel welcome.

Christmas morning: full of joy and laughter (…and also oversleeping because your toddler was in your bed so you couldn’t check your alarm volume and turns out it was at ZERO and you didn’t find out till 7:26am… when your twin boys are screaming and the alarm ***silently*** has been going off since 6am… but you’ve been helping Santa with duties/aka installing – literally – a new play room, and didn’t get to sleep till 2am; stressing out your kids don’t see the “big gift” right away; putting your premade casseroles in the oven 1.5 hours late then forgetting you have to cook a special syrup even though you still haven’t brushed your teeth/hair but your entire family is over – each looking like a snack bc they prepared properly – and hungrily awaiting their promised breakfast; all whist 3 terrorists parasitically demand their milk with full diapers awaiting my changing.) Christmas, such a magical holiday. 🌟 Btw I think many moms can relate, right? If so, please share your experiences with me. I could use some solidarity 👊🏼💪🏼

The Former RHOC Star Hasn’t Commented On The Christmas Posts

Meghan King Edmonds has been very active on social media, according to The Cheat Sheet. While she hasn’t commented on Hayley’s post, she posted pictures of her kids enjoying Christmas. She shared with fans how the holidays were just a collection of disasters.

She said, “Christmas morning: full of joy and laughter (…and also oversleeping because your toddler was in your bed so you couldn’t check your alarm volume and turns out it was at ZERO.” She also said she forgot to cook syrup for one of her recipes and to brush her hair. But the pictures she posted show the kids had a really good morning so those little things didn’t really matter.

Meghan’s relationship with Hayley has always been strained. The younger Edmonds has called her a narcissist and has defended her father. She had previously responded to fans who said her father should apologize that Meghan was the one who blended families are never easy. Fans will have to wait and see if Meghan really does come back to the Real Housewives of Orange County.