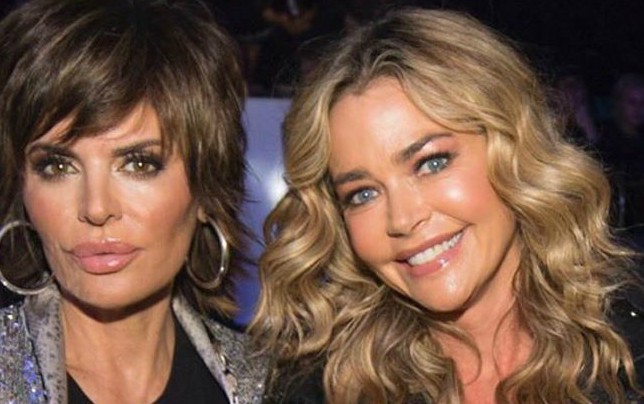 The Real Housewives of Beverly Hills doesn’t even have an airdate yet and the drama is already heating up. Days after Lisa Rinna shaded Denise Richards on Instagram, sources leak that the two friends had a falling out during Season 10 filming.

When Denise Richards joined The Real Housewives of Beverly Hills for Season 9, she had an ally in the cast. Actress Lisa Rinna knew Denise from their long careers in Hollywood.

In fact, Denise’s husband, Aaron Phypers, was once married to Nicollette Sheridan. As fans know, Lisa’s husband, Harry Hamlin, was famously dumped by Nicollette when she ran off with singer Michael Bolton.

Us Weekly reports that things got tense between Lisa and Denise during the filming for Season 10 of the hit Bravo show. With Lisa Vanderpump gone, the cast was under pressure to bring the drama.

However, Denise showed last season with Camille Grammer that she has very little time for drama.

Denise has had enough of Rinna’s constant meddling and passive aggressive behavior, especially with social media. Denise and Rinna are headed toward a showdown on camera, which is what Rinna has wanted.”

The insider further states that Lisa Rinna stirs up drama for job security.

Denise recently opened up about a serious medical emergency she’s been dealing with. Sharing a photo of her bruised stomach, The Bold and the Beautiful actress revealed that she had surgery to fix four hernias at once.

My hubby posted this & I need to actually thank him for taking such great care of me. This was a couple months ago & turned out to be a good lesson for me to always listen to my body. Being a mom, wife, & having a career sometimes it’s easier to just be strong and power through, I thought the pain & my other symptoms would just go away. They did not and got a lot worse. I’m so grateful to @herniadoc & her fabulous team. I thought I had one femoral hernia, I actually had 2 femoral & 2 inguinal. And I waited way too long & didn’t even tell my husband how bad I was feeling (I know it was stupid) … gotta always listen to our bodies & take care of ourselves. #Repost @aaronwilliamcameron ・・・ To the most incredible woman my soulmate. I am always in awe of your Beauty perseverance, dedication in all you do. These photos taken a couple of months ago from an emergency procedure femoral hernia not one but four! 6 hours waiting close by. Love you baby everyday getting stronger! @deniserichards

The RHOBH star’s intention was a gentle reminder to her followers to always listen to their bodies. However, Denise’s RHOBH co-star took the opportunity to call her out for missing a cast party over the weekend.

In a surprise move, Camille jumped to Denise’s defense by telling Lisa to call her supposed friend directly next time instead of attacking her on social media.

Denise has remained above the fray, but another RHOBH co-star has not.

Former The Real Housewives of Beverly Hills star Brandi Glanville is never one to miss the chance to weigh in on the drama. The model tweeted that she’s not getting involved, but then proceeds to get involved by shading Camille.

Ive been asked not to get involved and i won’t but I have sooooo many things to say about A certain someone tweeting at certain other person to get off Twitter…R U serious !!!!! Pot call kettle”

Ive been asked not to get involved and i won’t but I have sooooo many things to say about A certain someone tweeting at certain other person to get off Twitter…R U serious !!!!! Pot call kettle

Brandi has made several guest appearances on the Bravo show since she was fired after Season 5. She will once again return in a “friend of” role for the upcoming 10th season. What else do we know about Season 10?

Everything We Know About Season 10

Along with Brandi, Camille, Kim Richards, Adrienne Maloof and Eileen Davidson will appear on RHOBH, according to Us Weekly.

The Real Housewives of Beverly Hills fans can also expect to see another guest, though not until Season 11. Teddi Mellencamp is expecting a daughter in early 2020.

Bravo has yet to release a premiere date, but the show will return sometime in 2020.