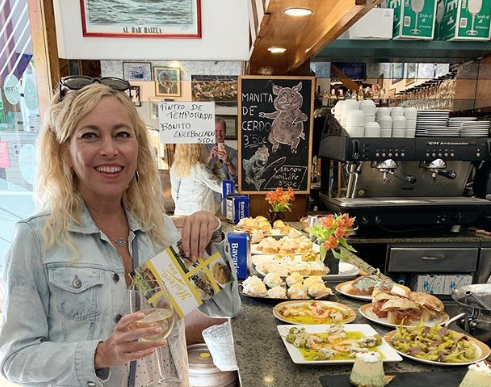 Lisa Rinna’s BFF is joining the cast of Real Housewives of Beverly Hills with the exit of Lisa Vanderpump and the unknown status of Camille Grammer. Currently, it’s not clear whether she’ll be a full-time cast member or just a friend of the cast. Either way, fans want to know all they can about the newcomer.

Sutton Stracke is meshing with the other housewives according to US Weekly. In particular, she seems to be getting along with Kyle. So far, that’s a good sign she might fit in well with the OGs.

#dgfamily shopping lunch! Specs! Thank you @dolcegabbana for making the day so fun and special 💗

The first thing to know about Sutton Stracke is she’s close with Lisa Rinna. The two share pictures on social media with the most recent being from Elton John’s award’s show party. The next thing to know is she’s an amazing party host. She’s known as one of the best in LA. One of her besties is Jennifer Tilly according to Hollywood Life, another actress and one in current movies. Actresses aren’t the only people she rubs elbows with. In one of her Instagram posts, she’s hanging out with Bill Clinton.

She has three teenagers–one daughter and two sons. On a recent post to Instagram, Sutton posted her daughter, Porter in her school uniform for the first day of senior year. She captioned it, “I am privileged enough to get to take this pic for the final time.” How sweet!

Hopefully, Sutton Stracke seeing Lisa Rinna’s run on the show will get her excited to join. It’s not easy to find people who want to be cast on The Real Housewives. An agent who has helped cast Real Housewives before told Your Tango, “There’s old money in every city and people don’t want to exploit themselves. Nobody with integrity is going to go on a reality show like that where you are flaunting your lifestyle and flashing cash.”

Since Season 10 has started filming, people are getting excited seeing the pictures shared on the fan pages. Most recently, Kyle Richards and Teddi Mellencamp were spotted out for lunch while they filmed. Fans have to wait until 2020 for the new season, but it’s fun to speculate about what’s going on. It’s too early to know for sure Sutton is joining the cast, but rumors are certainly flying.