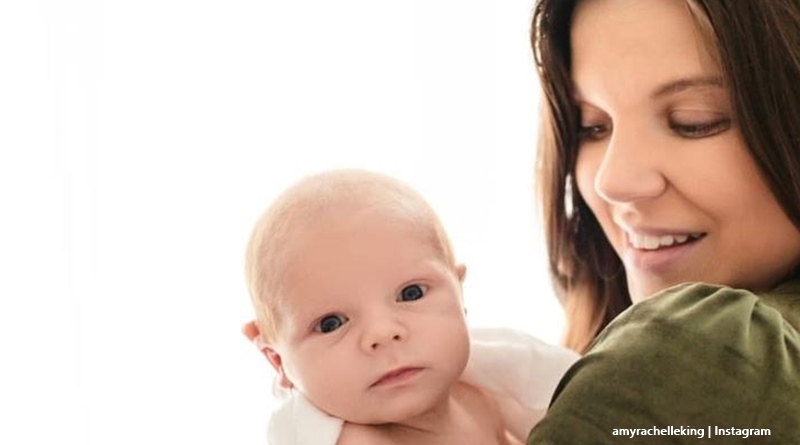 Duggar reality TV show, 19 Kid & Counting features Amy King now and then. The cousin of Jinger and Jill, and the rest of the brood, felt the loss of their Grandma Mary deeply. In the final episode of the season this week, we saw them cover the sad event. Amy took it hard, but she decided to still enjoy her forthcoming motherhood. And, now she shared the most charming video of baby Daxton Ryan.

TV Shows Ace reported that the loss of Mary really hit Amy hard. The very sad time came while she expected her baby. Recently, she took to Instagram to share loads of pics of Mary. And, there she mentioned how she preferred keeping her grief “private.” She also said that Mary was more “like a friend” to her, and she misses her dearly. It seems one regret for Amy King’s the fact that Mary’s untimely passing meant she never met her new son, Daxton.

But, Daxton perhaps helps to offset the pain and the void that Mary’s death left in her life. People Magazine reminds us that Daxton arrived on October 9.  Ahead of his birth, Amy Duggar King told the outlet, “We just can’t wait for this little ball of energy to arrive! He’s already named, so let all the embroidery begin. I am so obsessed with baby bath robes!'” And now Daxton’s here, she constantly shares photos and updates of her bundle of joy. Now, she shared a charming video of Dax in the middle of the night.

The charming video of Daxton that Amy shared

On Wednesday, Amy took to her Instagram and shared a lovely video of Dax. Her husband, Dillion lay on the bed trying to sleep. But, Daxton thought that was a bad idea. She captioned her video with, “I’ve tried the paci, the boob, rocking, bouncing, changed him, sang to him and he’s just not having it tonight!” She explained as she added he was treating the night like a party.

The great-nephew of Jim Bob Duggar simply smiled and giggled as Amy tries to get him to “tell [her] a story.” You can see in the video below that this baby’s one cute and happy little fellow. Fans reacted to the post, and some of them came up with ideas to help him sleep. One fan suggested, “A nice bath sounds perfect!!!” Others agreed that sometimes works.

One Duggar fan suggested, “Do your nighttime routine with a nightlight, saving nursing for last. It’s too bright for him.” But Amy explained a bit more. In reply, she said, “He’s 2 months old, there isn’t really a nighttime routine. He’s too young and his feedings and naps are sporadic. We do the day- play- sleep routine though and it’s working well! But yes he was in a very dark room and still wide awake!! He’s just fighting it hard tonight!! But his little gummy smiles are so worth it!!”

I've tried the paci, the boob, rocking, bouncing, changed him, sang to him and he's just not having it tonight! He decided it's a 🎉😂😍

What do you think about the charming video that Amy Duggar King shared? Do you have any ideas on how to get wide-awake babies to sleep? Sound off your thoughts in the comments below.