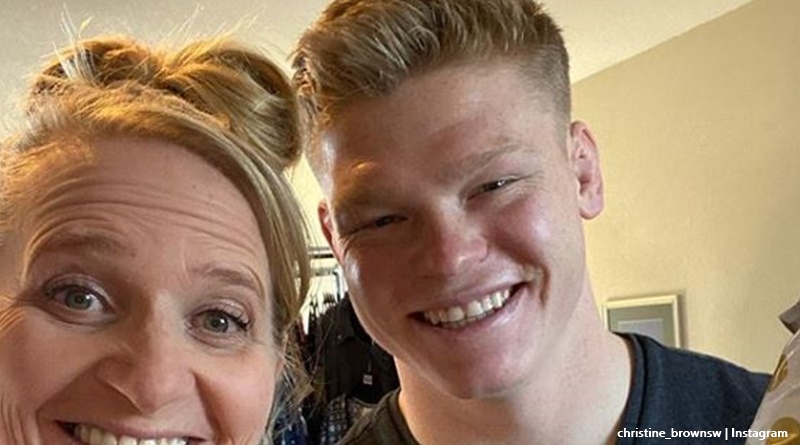 Sister Wives fans heard that a new season of the TLC arrives in January. But, when the announcement came, Christine Brown seemed rather more interested in the birth of Maddie’s baby, Evie K. Now, with Christmas coming soon, she shared about how happy she is that Hunter’s home for the holiday season. Interestingly, Hunter and Maddie Brown Brush are the offspring of Janelle Brown.

TV Shows Ace reported that when the new season announcement came, Christine rather shared about Kody’s second grandchild. The one thing about these polygamous families is there’s no shortage of moms to go round. Christine’s one example of how they see all the offspring as theirs. From that respect, it certainly could claim the term, “one big happy family.” That explains why Christine seems so happy to see Hunter.

Cheatsheet reminds us that Hunter’s the brother of Maddison and Savanah. He’s the son of Kody and Janelle Brown. He also has a brother named Logan, another named Robert Garrison, and young Gabe. Hunter’s rather quiet and he’s seldom seen on Sister Wives. Plus, he keeps his Instagram private. Before “enrolling in the United States Airforce Academy,” he went to the “United States Airforce Preparatory school.”  His graduation next year will be a milestone celebration for the Brown family.

Christine shared about Hunter in Flagstaff

Taking to her Instagram, Christine shared a photo of them together. She captioned it with “@hunter_elias01 is in town.” But it looks like he’s not going to get to laze around too much. The Sister Wives star added, “I totally putting him to work!!” Then, she added the hashtags “#shipping #lularoeretailer #becauseoflularoe.” Fans of the show know from her Instagram, that like Meri Brown, Christine makes additional income off the LuLaRoe fashion line.

Fans commented on the photo, and one said, “The only part of polygamy that has ever made sense to me is that one kid multiple mom dynamic. More love, more support and more encouragement. I love when you highlight your relationship with your sister wives kids.” Another Sister Wives fan agreed, saying, “Think about all the positive support these kids get. The parents put their needs secondary to collectively raising this very well adjusted family.”

What do you think about Christine Brown who always enjoys time with the whole vast brood of Kody’s kids? Do you think Hunter will object to being put to work while’s home? From what we saw of him on the TLC show, most likely, he’s just be happy to lend a hand. Sound off your thoughts in the comments below.

What is ‘Sister Wives’ Christine Brown Doing To Earn Family Money?
Tristan Thompson Supports Khloe Kardashian Amid Engagement Rumors
‘Gold Rush: Freddy Dodge’s Mine Rescue’ Exclusive: Streaming Series Comes To Discovery, Preview
What Do We Know About The Future Of ‘Bringing Up Bates’?
‘My 600-lb Life’ Where is Pauline Potter now? Here’s Her Update