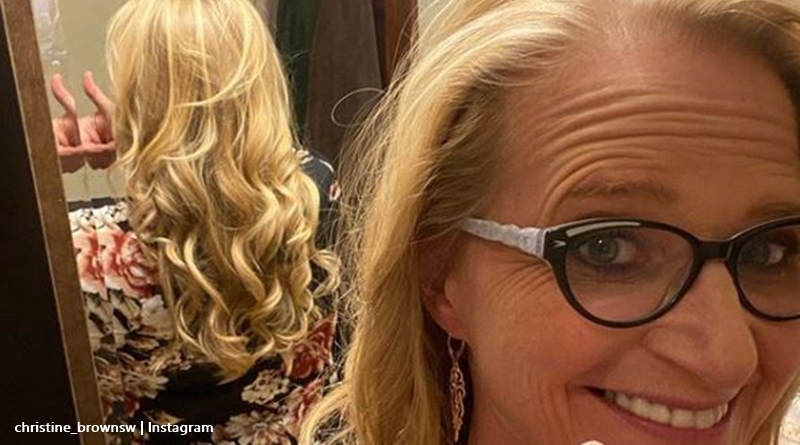 Sister Wives fans waited for ages for the great news that a new season comes soon. TV Shows Ace noted that “the highly anticipated new season of Sister Wives” picks up with the Brown family where they left off in Flagstaff last season. But, Christine isn’t focussed on that right now. She’s totally busy adoring Madison’s baby, Evie K.

Fans of the TLC show know that the four sister wives in Kody’s family view the kids as theirs. Although the many children of Kody Brown have different mothers, the moms all enjoy the kids. And, that extends to the Brown family’s two grandchildren, Axel and his sister Evie K. While fans go gaga with joy at the news of a new season of the show the Brown family gets on with their lives in Flagstaff. Now, we know that Christine’s not the blood grandmother of Evie K, but that does not stop her from going gaga over the new baby.

Christine took to her Instagram on Monday night and shared a photo of the cute little girl fast asleep in her onesie decorated with giraffes. Christine captioned the photo with, “Two of my favorite things. Granddaughter, Evie K and giraffes! Taking a nap on my bed.” So, it looks like Madison’s visiting Flagstaff again. She last visited just before she shared the news that their daughter suffers from “fibular aplasia, tibial campomelia, and oligosyndactyly syndrome. The condition commonly referred to as FATCO syndrome.”

For Christine, the arrival of Janelle’s daughter’s second baby gives her a lot of joy. Actually, probably more joy than even the new season of the show brings. Naturally, fans commented on the photo. One fan grew a bit puzzled about the relationship between Christine and the baby. They noted, “isn’t she Janelle’s daughter and granddaughter?” Another Sister Wives fan explained, “Yes but they live as a large family. The girls claim the other moms as their own moms.”

Of course, none of the Brown family can post anything right now without fans commenting on their excitement about the new season that comes on January 5. On Christine’s post, one fan said, “Whoop! the new season coming in January…hope we see something of little Evie K in it!” Others noted that Christine’s simply their favorite of all the wives in the Sister Wives show.

The new season shows some issues with the property in Flagstaff

Recall that at the end of the last season, we saw Kody planning one big home for all the wives. Popculture reminds us that Christine said, “I would happily live next door to [my sister wives] for the rest of my life. Absolutely.”But she added, “With them? No, no. Have you met them?” The new season brings some issues over property ownership, according to the preview, so no doubt it’s a tiresome time for the wives. Perhaps that’s why Christine seems more excited about Evie K than the new season of the show.

What do you think about Christine Brown and the other wives collectively thinking of Evie K as “their” grandchild? Do you think that’s one lucky little girl with all those grandmas? Do you hope we see a glimpse of Evie K in the new season? Sound off your thoughts in the comments below.

Remember to check back with TV Shows Ace often for more news about the new season of Sister Wives.