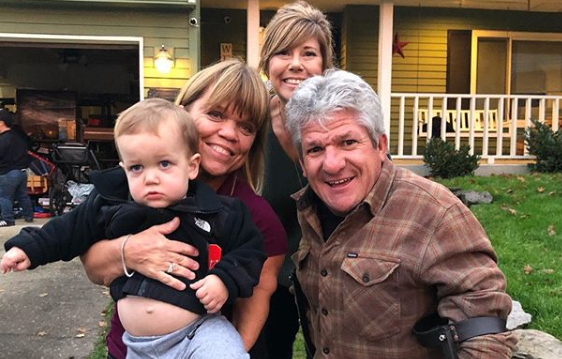 Matt Roloff‘s longtime girlfriend Caryn Chandler has caused a stir after she addressed some rumors about engagement with Matt.

Upon The Welcoming Of Matt’s New Grandbaby, Fans Felt Compelled To Ask About Marriage

Caryn recently posted a photo of herself holding Matt’s new granddaughter, Lilah. Lilah is the baby of Matt’s son Zach and his wife Tori. Caryn captioned the photo, “Sugar & spice & everything nice. Welcome to the world baby girl! Newest Roloff is here and I didn’t want to let go.”

Followers were excited about the baby, but one decided to take the leap and commented, “Thought I saw a ring on that left finger.”

Caryn responded, “Hahaha. No – we are just enjoying life with no rush – I promise to let you know if that changes though.”

But it’s pretty clear to fans that she’s an important part of the famous family’s lives. On Friday, December 6th she posted a picture of herself, Matt, and his other grandchild of Zach and Tori, adorable Jackson, 2.

Love seeing these smiles after a week away 😍

Matt stars in Little People, Big World with his ex-wife Amy Roloff. The couple was married for 28 years but split in 2015.

According to RadarOnline, Amy accused Matt of cheating on her with Caryn before they divorced. In her tell-all book A Little Me, Amy shared that she believed he had an inappropriate relationship with Caryn long before the two got a divorce.

Amy wrote, “Matt and our farm manager [Caryn], who had been working for us a number of years by then, seemed to have more than just a working relationship or friendship. I saw messages, pictures, and other things that should not have been shared between people who just worked together and were still married to other people. I was devastated.”

Even Through It All, The Family Worked Out Their Differences Before Thanksgiving

After the beloved couple officially divorced, Matt and Caryn made their relationship public. Following the allegation in Amy’s book, Matt took to Instagram to post a photo of a full moon in which he tagged Caryn, he claimed he’d be taking the “high road.”

It seems Matt, Amy, and Caryn buried the hatchet right before Thanksgiving. On November 22nd, Matt posted again on Instagram. The photo featured himself joyously posing with Amy, little Jackson, and Caryn.

Baby Lilah was born on November 19th, this seems to have brought everyone together.

Amy has also found herself in love again, though it was long after her split from Matt. She is now engaged to her longtime beau Chris Marek.

Amy took on a lot of drama with Matt and Caryn. The couple took over the family pumpkin patch while Amy took to the sidelines amid her mother’s passing.

Still, it seems like Amy and Chris are likely to beat Caryn and Matt to the altar.