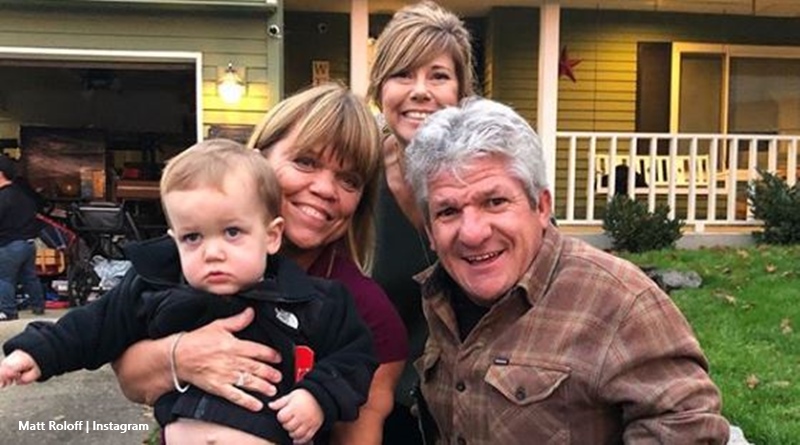 LPBW fans know that Tori Roloff safely delivered her baby girl Lilah just days ago. Matt never said much on social media, which is unusual. But, when he did he shared his many blessings after the birth of his newest grandchild. He sounds ecstatic, and fans know how much he enjoys being a grandfather.

TV Shows Ace reported that Tori shared the first pics of little Lilah on November 21. We noted, “In minutes, her followers showered the post with over 30,000 likes and nearly 2,000 comments.” Since then, we saw Matt Roloff’s girlfriend Caryn Chander share photos and her happiness. Plus, Amy popped up with yet another photo. And now, we finally hear a lot from Matt about his feelings on the newest LPBW addition.

Taking to his Instagram on Friday night, Matt explained some of his feelings. And, not just about Lilah, but also Audrey’s expected baby in the near future. The patriarch of TLC’s Little People, Big World show feels he’s, “the most Blessed Grandpa on the planet earth.” He went on to say things have been quite busy over the last few days. But, now he wants everyone to know how he feels. Matt called his new granddaughter, “a professional baby,” just like big brother Jackson and her “cousin Ember.” But, the pictures he selected told a story as well.

The main picture that Matt shared showed Lilah’s big brother Jackson. In it, were Caryn, Matt, and Amy. Matt explained, “I choose these to share because they show the family unity that came together to make everything perfect…And another perfectly crafted individual grandchild enters the world for this very very proud grandpa!” LPBW fans might well cheer for that, as they don’t like to see division in the family. And, these grandchildren seem to unite everyone lucky enough to embrace them.

Soon Matt will grow his extended family by yet another grandchild as Audrey Roloff’s also pregnant. Like her daughter Ember and cousin Jackson, the awaited baby will be just a few months apart from Lilah Roloff. Naturally, fans can’t wait to follow the Roloff family in their new journey with the adorable little ones. Hopefully, we’ll see that in more seasons of LPBW.

Ok. This is some serious Roloff family business that I’m going to lay out for you all!! … I am the most Blessed Grandpa on the planet earth.. not to take anything away from All the other Blessed Grandpas’ out there in grandpa land… but over the past several days ( I haven’t been on social media much) because we’ve been a bit occupied.. most of you probably know my 3rd grand baby Lilah Ray was born to my son Zach and his amazing wife Tori Over the past several days… I’ve taken a hundred different photos and dozens of videos of all the incredible experiences we’ve had as an extended family. Soon our fourth grand baby will arrive. But this post is about the latest edition to the Roloff family. Lilah is a professional baby.. no other way to say it!’ ..Just like her big brother Jackson and her cousin Ember she is Amazing in every way. She’s beautiful, calm, cool and collected. She eats and sleeps just like a professional baby. Out of the many photos taken over the past few days I choose these to share because they show the family unity that came together to make everything perfect. … And another perfectly crafted individual grandchild enters the world for this very very proud grandpa! #lovelovetoAllthegrandpasoutthere #bringonmoreimready

Will there be another season of Little People, Big World?

Fans desperately hope for a new season, especially with the new grandkids coming along. According to InTouch Weekly, Amy let it out that they are, in fact, filming for another season. They wrote in October, “Amy Roloff revealed on Instagram that ‘Little People, Big World‘ is filming.” So, that’s wonderful news.

What did you think about the post that Matt Roloff shared on his many blessings after the birth of his third grandchild? Sound off your thoughts in the comments below.