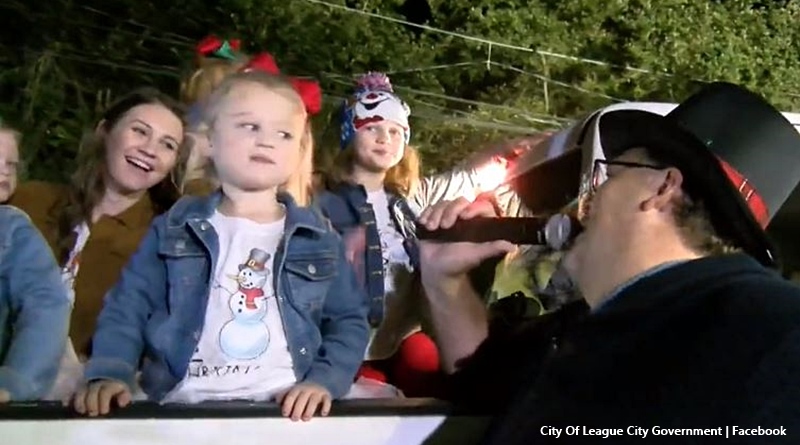 OutDaughtered fans got so excited in League City Texas. That’s because celebrity marshals included the Busby family at the League City Christmas parade last night. Not only did Danielle share about it, but the League City Facebook page covered the video of the event. Those fans who attended were very excited to see Adam, Danielle, and the kids there.

TV Shows Ace reported that recently, Danielle got herself in a state over her daughters who squabble a lot. But, on Saturday night, the quints and Blayke looked and behaved like angels. On their best behavior, they rode in the back of an open vehicle. Danielle shared about it on Instagram but lamented that she left her phone at home. However, she managed a snap or two on Mimi’s phone. But, not to worry, as it was covered on Facebook.

Danielle captioned the photo that showed her and OutDaughtered sister, Blayke. She wrote, “🎄 League City Christmas Parade 🎄was a blast! I left my phone at home 😭(on accident) but was able to snap this in MiMi phone. Our fam was one of the Grand Marshals in the parade and we enjoyed seeing all the happy faces waving back at us as we passed by. We love you League City.” Fans who saw the parade responded with excitement.

🎄 League City Christmas Parade 🎄was a blast! I left my phone at home 😭(on accident) but was able to snap this in MiMi phone. Our fam was one of the Grand Marshals in the parade and we enjoyed seeing all the happy faces waving back at us as we passed by. We love you League City #leaguecitychristmasparade #leaguecitytx #itsabuzzworld

Fans respond to the Busbys as celebrity marshalls at the parade

OutDaughtered fans lucky enough to be at the parade mentioned how seeing the Busbys made their night out. One said, “Oh my sister lives there and sent me videos of yall riding in the truck ❤️ so fun! I saw mimi waving in the back!” Another mentioned, “I was so happy when I saw y’all. I said, “there they are!!!” Lol 💕💕💕.” Meanwhile, yet another lucky fan also mentioned it. they said, “We loved seeing you guys! The parade was so fun! My daughter had a blast! There were like 9 santa’s in the parade 🤣 I told her…he’s magic!! 😂😂”

For those who missed being there, thanks to the City Of League City Government, on Facebook, they can watch the Busbys. As the parade approached, the commentator took special time to talk about them, saying how lucky there were to have the family in their hometown. In fact, he told the crowd this might be their “chance to feature” on TLC’s OutDaughtered. Maybe the cameras were there.

When the truck with the family stopped, he spoke to them. He said, “look at these – (the quints), aren’t they the cutest things in the world?” Then he asked one of them what their name is. And, yes, it just had to be Riley!

What do you think about the Busby family fans getting excited to see them all at the League City Christmas Parade? Sound off your thoughts in the comments below.

Remember to check in with TV Shows Ace often for more news about the cast of TLC’s OutDaughtered.