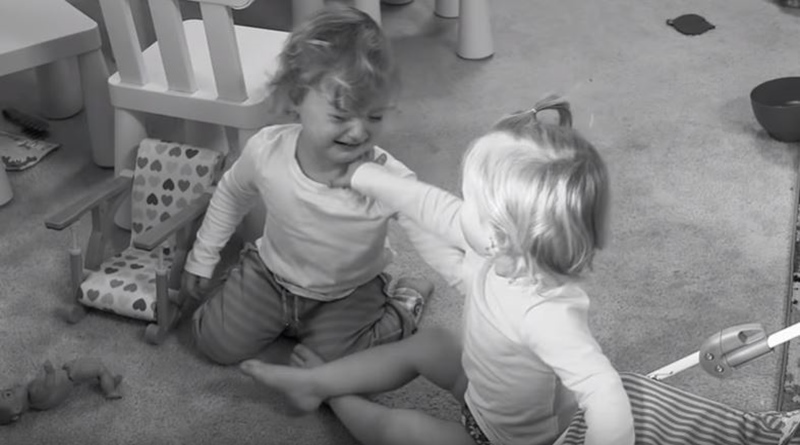 OutDaughtered on TLC features the cute little quints, their big sister Blayke, and mom and dad, Adam and Danielle Busby. Now four-years-old, their personalities seem more defined. But, like any sisters, they squabble now and then. And, it drives Danielle nuts. In a clip from the show, she actually got quite emotional about it.

OutDaughtered quints – Adam and Danielle try and give them equal attention

TV Shows Ace noted that Danielle and Adam make a point of going on dates with each of the girls. They want each child to be an individual and allow their personalities to develop. As they grow older, those personalities become more obvious. We see naughty Hazel, withdrawn Parker, playful performers Olivia and Ava, and dominant ring-leader Riley.

These days, the kids show their differences in the way they cope with Kindergarten and Pre-K. Riley tested out super-intelligent. Parker’s too afraid to say much and might be held back. Hazel’s clever but naughty, says the assessor. And the twins, Ava and Olivia make sure to do enough to get by. And, it looks like all those different personalities clash now and then in the OutDaughtered family.

Squabbling by the quints – Danielle stresses as they drive her nuts

Cheatsheet remarked that Danielle…called Riley the “naughtiest” of the bunch in the past. ‘The girls are at that age where they’re really testing boundaries, so we’ve started doing time-out for when they’re bad.'” With one or two kids squabbling, most people cope. But, when five of them get involved, and sometimes, sister Blayke, the situation escalates. Naturally, Danielle Busby finds that stressful. She talked about her emotions in a recent clip shared by TLC on YouTube.

The clip starts with Adam saying that with all those girls in the house, they “have their fair share of sibling rivalries.” Next, we see the OutDaugtered twin Olivia and clever Riley squabbling while coloring. Since babyhood, Danielle says they “always bickered more than anybody else.” Never-before-seen footage in the clip shows the two girls physically fighting and slapping each other. Now they’re older, Adam explains that “Riley wants to think of herself as the Alpha.”

For the parents, Riley’s a bit much sometimes. She’s bright, and “always wants attention.” And, she hates it when she sees Olivia getting any attention. Meanwhile, Olivia won’t back down to Riley and then the whole thing “gets out of hand,” Adam notes. Other scenes show screaming, crying and tantrums and once again, slapping between the girls. Danielle says the best thing they can think of is to make them “go and apologize to each other.” Then, Danielle starts crying. She explains it’s the “night time that gets to [her].”

The OutDaughtered mom says that “no matter how hard the day was, and no matter how much [she] fights with Riley…they are always the “sweetest” kids at night. At the end of the day, there are lots of “I love You” said. What do you think? Do you think the hard side of parenting must be dealing with all those squabbles and rivalries? Sound off your thoughts in the comments below.