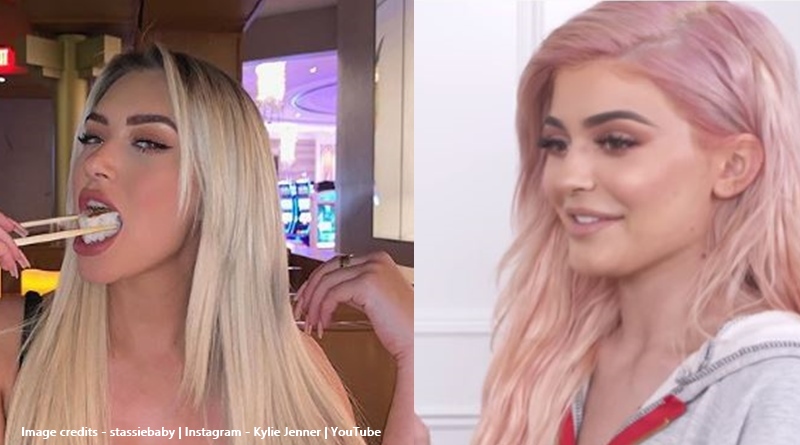 Kylie Jenner’s bestie, Anastasia Karaikolaou recently got seen out with The Bachelorette‘s Tyler Cameron. But, she doesn’t need his five-minutes of fame to rack up fans and interest on social media. She’s really very beautiful, many fans think. But in her latest pic, she got seriously photobombed, and fans joked about it on her Instagram.

TV Shows Ace reported that recently, Tyler Cameron of Hannah Brown’s The Bachelorette got cozy with Anastasia Karanikolaou. It came after they both attended a Los Angeles Clippers’ game. But, nothing further seemed to come of it, so far. Nevertheless, while he’s aiming high, there’s no guarantee Tyler would make it into the Kardashian clan. And, as Kylie’s best friend, Anastasia does that a lot.

Jordyn Woods upset everyone and they don’t talk to her anymore. Taking her place Anastasia, aka Stassie, hangs out with Kylie Jenner a lot more. We noted the two women go back quite a long way and were friends for years. The Standard UK  says she even moved into her home. Now Stassie says she’s looking for a new home. In the post about it though, she got a serious photobomb.

Kylie Jenner’s friend Anastasia shared a photo of her in a car, dressed in jeans and a black tee. As usual, she looks really stunning with the flowing blonde locks and a nice tan. Mind you, some fans pointed out the orange seats in the car made her look a bit orange. (Donald Trumpish orange). But that’s not where they ended their joking around on Stassie’s post. She captioned it with, “kels and i have been house hunting for the past couple days and i think we might’ve found the one!”

By Kels, she means her other close friend and fellow YouTube Influencer, Kelsey Calemine. She goes by ‘Father Kels‘ on IG. Anyway, her photo got photobombed by a man in the background who was busy photographing someone else. Many fans noticed it and laughed about it. One fan joked, “@jakepaul lmao he’s taking @fatherkels recent post 😂😂.” Others just wondered who one earth it was.

Fans thought the photobomb was really funny. Who knows, maybe he took a photo of Kylie Jenner? But, whoever it was looked really serious about taking the shot. Fans commented, and here’s what some of them said:

Even Kylie Jenner popping up in the conversation never diverted followers from the comments about the photobomb man in the background.

kels and i have been house hunting for the past couple days and i think we might’ve found the one! @superdown 😊 @wiresonly

What do you think about Kylie Jenner’s bestie Anastasia Karanikolaou getting a serious photobomb? Did you think it was quite funny? Sound off your thoughts in the comments below.

Remember to check back with TV Shows Ace often for more news about the family and friends of Kylie Jenner.