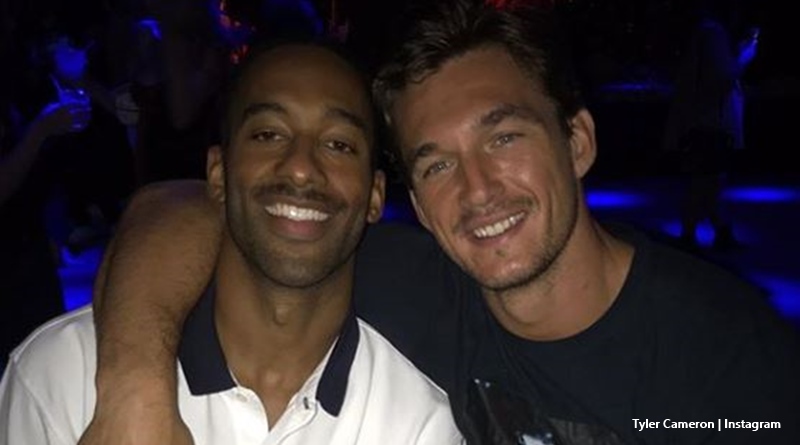 Tyler Cameron decided against being Hannah Brown’s second choice in The Bachelorette. Promptly, he moved on and started dating Gigi Hadid. However, they broke up and few romantic encounters seemed in the offing. But now, Tyler was reportedly seen getting close to Anastasia Karanikolaou (Stassie). If you don’t know, she’s Kylie Jenner’s best friend.

TV Shows Ace reported that Tyler said he was out there looking for love and is available: To the right person, obviously.  I mean if you fit the mold of the likes of Gigi Hadid, you may be in for a chance. And, it seems he keeps his sights set high. It looks like he’s moving into the circles of the Kardashian family. And, they’re a different kettle of fish from the little sitcom shows. Apparently, Anastasia and Tyler met before but never got close until now.

The report that the two got together and then got quite close came via E! News. Their source told them, “Stassie and Tyler met up at the Clippers game last night and were hanging out for a bit…They had met in passing before at a few events in LA, but this was the first time they truly hung out and vibed with one another.” Allegedly, after the basketball game, they went nightclubbing together. So, it looks like they hit it off very well. Well, she’s not following him on Instagram yet, but maybe we’ll see her there soon. Notably, Tyler Cameron does follow her on IG.

Kylie Jenner used to be the BFF of Jordyn Woods. But she upset the clan and basically got excommunicated. Next thing, we started seeing Stassie hanging with Kylie a lot. On Kylie’s Instagram, we see them dressed up looking hot at a Playboy Party. But, they really were friends for a long time before the Jordyn Woods saga. The Standard UK noted, “Stassie has known Forbes’ youngest self-made billionaire for nine years, with Stassie so close to Kylie Jenner that at one point she even moved into her home.”

stas said I’m having a playboy party.. pull up 🐰🖤

It certainly looks like Tyler Cameron’s thirsty for the rich and famous. Perhaps Alabama Hannah really never featured on his radar. Hannah’s becoming a star in her own right these days. But, she’s a far cry from the heady rich and famous lifestyle of those in the Jenner-Kardashian circles.

What do you think about Tyler Cameron being spotted getting close to Anastasia Karanikolaou? Do you think this might blossom into a serious romance? Sound off your thoughts in the comments below.

Remember to check back with TV Shows Ace often for more news about Tyler Cameron.