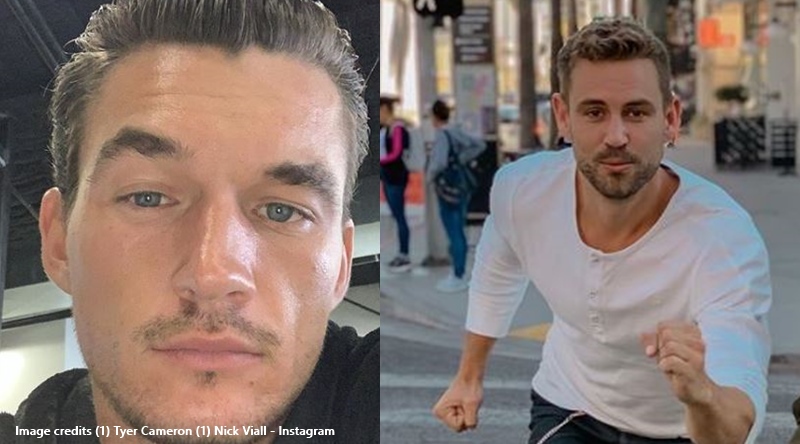 The Bachelor Nation franchise brings some odd couples and some dynamic relationships. But these days, it seems there’s no such thing as a “closet” anymore. And, sometimes the guys are not shy about letting their feelings out about other men. On Wednesday night, alum Nick Viall got flirty with Tyer Cameron, who we reported previously flirted with Andy Cohen.

Tyler Cameron took to his Instagram on Wednesday and shared a photo of his hairstyle. Many people commented on it. He captioned it with, “Swipe left to catch the vibe I get when rocking this hairstyle.” Lots of fans reacted to the picture.  Jason Tartick said, “Big slick back guy!” One fan noted, “I love a good slick back.” But then, Nick Viall joined the conversation.

Nick shared his thoughts on the photo of Tyer Cameron. He wrote, “I’d swipe right on you any day!” As one would expect, a lot of The Bachelor fans reacted to Nick Viall. One said, “@nickviall I, also would swipe right if given the opportunity. Maybe even a super like. Who knows. Life is crazy.” Another commented, “lol who wouldn’t. This man’s a five-course meal.” Meanwhile, maybe as Nick’s still single, another noted, “@nickviall that explains so much. 😉.”

While Tyler’s known for dating beautiful women like Gigi Hadid, he also flirted with Andy Cohen. TV Shows Ace reported that he commented on one of the Bravo host’s photos in early November. We noted, “In his grey jacket, baby blue shirt and pink tie offset by that salt and pepper hair and beard, no wonder he caught the eye of Tyler Cameron.” Tyler said to Andy, “Hot af🤤🤤.” Later, he also added two heart emojis.

Fans teased that Tyler and Andy could become an item. Now, it’s Nick Viall’s time for a similar tease. And, he’s single. Cheatsheet reminds us Nick “gave his final rose on [The Bachelor] to Vanessa Grimaldi.” However, the outlet also noted that “the couple split five months after the finale aired.” Now, rumors persist that Nick’s dating someone or other, but nothing really serious emerged. The same goes for Tyler Cameron.

Andy Cohen came out long before it was fashionable to do so. And, many men see him as a leading light when it comes to gender preferences. It’s probable that Andy helped pave the way for men in The Bachelor Nation like Tyler and Nick to openly express their admiration for other men. While fans tease Nick and Tyler, others love it that in fact, there’s simply no need for a “closet” in 2019. And, it’s perfectly fine for one man to admire another.

What do you think about Nick Viall getting flirty with Tyler Cameron who flirted with Andy Cohen? Sound off your thoughts in the comments below.

Remember to check back with TV Shows Ace often for more news about the cast of ABC’s The Bachelor Nation.