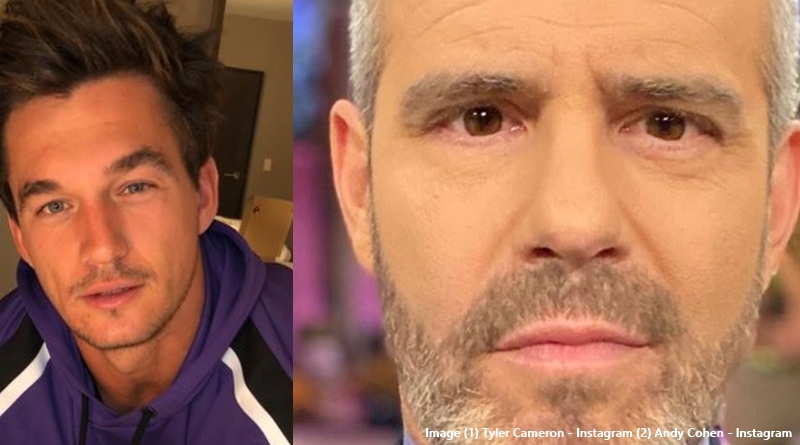 Tyler Cameron of The Bachelorette just took fans into the realm of Internet rumors by getting a bit flirty with Andy Cohen on his Instagram. Late Friday night, Andy shared a post to Instagram and as usual, he looked really hot. It came ahead of the filming of Bravo’s RHOC Reunion. Naturally, fans reacted to the post.

Andy Cohen’s celebrating the 14th year of the Real Housewives of Orange County. On his Instagram, he posted a photo of himself and captioned it with, “About to start filming the Season 14 #RHOC reunion. FOURTEEN YEARS!!!!!” Naturally, he dressed well for the occasion. But then, fans of Andy know that even if he wore torn jeans and a string vest, he’d look good. In his grey jacket, baby blue shirt and pink tie offset by that salt and pepper hair and beard, no wonder he caught the eye of Tyler Cameron.

Fans who don’t know The Bachelorette star went and checked out his Instagram after he made a few comments. Unanimously, they agreed that Tyler’s got a load of good looks on him as well. Naturally, a bit of speculation about the two men becoming a couple started up. Well, we don’t know if Tyler’s bi, but we do know he’s into hot-looking people like Hannah Brown and Gigi Hadid. Of course, there’s nothing wrong with men admiring other men in this day and age, as gender becomes more fluid.

Tyler commented on Andy’s post, “Hot af🤤🤤.” Later, he put up two heart emojis. Fans immediately responded, with one asking, “please elaborate?” Meanwhile, another fan turned it around on Tyler, simply stating, “Yes you are.” Andy Cohen responded with all-caps – “TYLER!.” And, instantly, the comments about a connection between the two stars came up. One follower said, “maybe a love connection👀👀.” One follower told Tyler Cameron, “You know @bravoandy is freaking out right now. You get even better with age @bravoandy.”

Plus, others love the idea of a romance. One follower said, “I’m so here for this romance.” Getting a bit personal, an enthusiastic fan noted, “@bravoandy oooh Andy he shoot his shot! Get it ayyyyyee 🙌🙌.” Loads of other comments came in, so here’s a few more of them:

Fans want Andy to ‘put a camera’ on Tyer

Several fans of Andy Cohen and Tyler Cameron urged Andy to get him on television. One fan said, “Andy get a camera following this stud now!! I need Tyler C in my life.” Another urged Andy, “Get this man a show.” Meanwhile others just joked that now they know why Tyler broke up with Gigi Hadid.

About to start filming the Season 14 #RHOC reunion. FOURTEEN YEARS!!!!!

What do you think about Tyler Cameron getting a bit flirty with Andy Cohen? Do you think he’s just joking with Andy Cohen, or could something arise from this connection? In any event, it’s sure to generate a few internet rumors. Sound off your thoughts in the comments below.

Remember to check back with TV Shows Ace often for more news, rumors, and gossip about Tyler Cameron of The Bachelorette and Andy Cohen of Bravo’s RHOC.

Netflix‘s ‘Trippin’ With The Kandasamys’: Release Date, Trailer, & Cast
‘The Young And The Restless’ Spoilers, June 7-11: Chelsea In the Hot Seat, Amanda Stunned
Jade Roper Does The Cocomelon Challenge – Did The Kids React?
Why Does ‘sMothered’ Star Cher Look So Familiar?
Peter Weber Shares Heartfelt Tribute To Chris Harrison