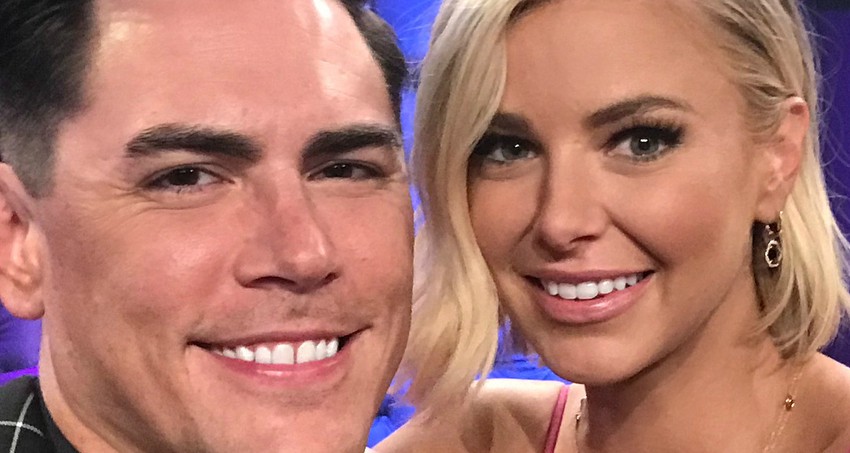 During Season 5 of Vanderpump Rules, star and SUR bartender, Ariana Madix, revealed that she was working on a book of cocktails. Not one to be left out, her boyfriend and fellow SUR bartender, Tom Sandoval, pushed his way into the book project.

It was one of the few arguments between the couple that fans have seen on the show. In this YouTube clip, Ariana tells Tom that she won’t let him take control of her book and calls him a “Bitter Betty” for throwing a tantrum. Apparently, the tantrum worked because now the book is “their” book and not just hers.

The book, titled Fancy AF Cocktails, was released this week. Us Weekly offered a breakdown of some of the backstage Vanderpump Rules tea spilled. A rage-text from Tequila Katie (Katie Schwartz-Maloney) was included to urge readers not to drink and text.

“I’m tired of fighting and defending myself against y’all and my fiancé. Y’all are very much his friends and it’s hard to argue that. But I’m Very upset and frustrated.”

Us Weekly shared some of the other interesting tidbits from the book.

Vanderpump Rules has its fair share of party scenes. Wedding receptions, Pride Parade gatherings, cast trips to nightclubs. Ariana dishes that the parties are not as they appear on TV.

For one – the music is often turned off due to copyright issues.

Because of music rights, we either have to turn off the music or film in other locations for portions of the receptions. This happens on vacations, too. Producers will sometimes take over the DJ booths when we’re at clubs with loud music.”

Throughout the show’s eight seasons, Jax Taylor’s raunchy past has come up in discussions quite frequently. The former model lived with Tom Sandoval in Miami during their early modeling days. Once the two moved to L.A., Tom Schwartz roomed with them.

In the book, a cocktail is dedicated to Jax’s hook-up behavior. Tom does note that Jax settled down and his wife, Brittany Cartwright, broke the “curse”.

“Vintage Jax would bring home and hook up with random girls. There was only a bed-sheet separating us from them. We would hear a plethora of things told to these girls. … I call this drink the Gentlemen’s Curse because Vintage Jax would say gentleman-like things to these girls, but would be cursed by the worlds he could never live up to.”

Ex Kristen Doute Has Two Drinks Named After Her

In the early season of Vanderpump Rules, Tom Sandoval dated and lived with SURver Kristen Doute. Their breakup was one of the most shocking scandals on the show. Kristen hooked up with Jax while Tom was literally sleeping in the next room.

The grudge between Tom and Kristen has faded in the years since and they are friendly-ish. Kristen is even on good terms with Ariana, even though Kristen still believes that Tom and Ariana hooked up while he was still in a relationship with Kristen.

Tom “honored” Kristen by naming the Bitter Ex drink after her and explaining it like this:

“She’s the one who told her boss to ‘suck a d*ck,’ the one who scaled a fence to confront her other ex with his alleged mistress, Hope, and the one who cheated on me while watching Drive with my best friend while I was asleep in the other room. To honor my ex, this drink is messy, bitter, spicy and salty.”

During Season 7, the VPR ladies took a girls’ trip to Solvang for wine tasting. As fans know, Kristen does not hold alcohol well and has an epic meltdown that Ariana and Tom paid tribute to with a cocktail.

To honor her Solvang meltdown, I created this special cocktail with a wine base. Be careful … this one will hit harder than Kristen’s a$$ hitting the floor as she tries to make a dramatic exit.”

Is It About the Pasta? – One Drink Plays on VPR Cocaine Rumor

One of the most iconic Vanderpump Rules scenes, Lala Kent and James Kennedy get into an argument over pasta. As the argument continued, James kept saying, “it’s not about the pasta!”

Fans took this saying and ran with the rumor that “pasta” was a code word for “cocaine.” In the Fancy AF Cocktails book, Tom and Ariana play on this long-standing rumor by creating a drink called “I Don’t Do Coke.”

“If you are like me, someone who doesn’t like to put anything up your nose, but you want to be able to hang out with your friends and last, this drink is for you. It will give you the energy of ‘pasta,’ but won’t upset your stomach or I’ve our the jitters like coffee or energy drinks.”

Vanderpump Rules returns to Bravo on January 7 with the premiere of Season 8.

Jinger Vuolo Shows Off Legs In Super-Short Shorts
Fans Praise Jessa Seewald For Living Like Everyone Else In New Photo
Lindsie Chrisley Snubs Todd On Father’s Day 2021
‘Below Deck Mediterranean’ Season 6: Release Date, How To Watch
Why Did Cody, Abigail’s Son, Visit The ‘When Calls The Heart’ Set?