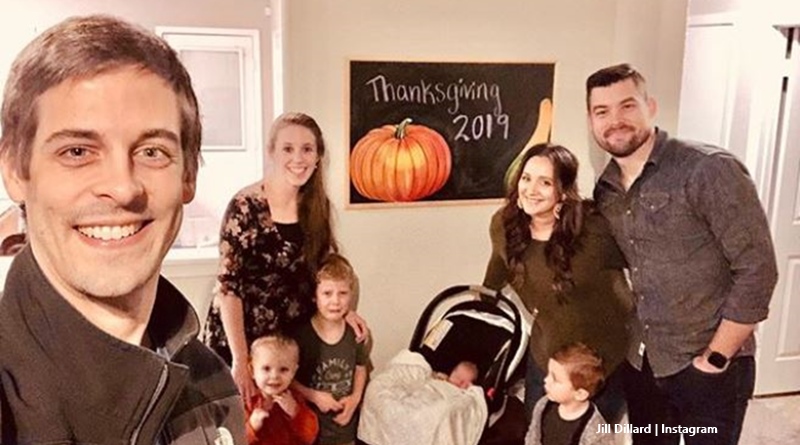 Duggar fans know that Thanksgiving’s one of the holidays that Jim Bob and the kids celebrate. But this year, Joy-Anna and Austin Forsyth went to Texas, so they weren’t there, we reported. Meanwhile, Jill and Derick who live in Arkansas missed Thanksgiving with the family and opted for a Friendsgiving instead.

Romper reminds us that the Duggar family often eschew some annual holidays, but they enjoy gathering for Thanksgiving. The outlet noted, “not only do the Duggars try to get everyone together for the big holiday in November, [but] Michelle also wrote that they tend to invite extended family and friends over for the day as well.” However, this year, Jill and Derick Dillard never went along. And, unlike Jill’s sister Jinger, who lives in LA, they actually stay in Arkansas.

While Jill and Derick decided to celebrate the holiday, they opted to have friends around. Jill took to her Instagram to share about their day. It looks like they had fun as their son Isreal looked a bit tuckered out. Jill Duggar Jillard captioned it with, “We had a wonderful Friendsgiving yesterday! 🤗 …Haha and the boys had so much fun playing that they were so tired and ready for bed by the time we took this pic.” Actually, this Thanksgiving was the first in their new home.

Fans who saw the post worried about the fact that they never chose to celebrate the day with the Duggar family. One person suggested it’s because they live far away. They wrote, “I thought they lived in Little Rock, so a good 4 hours away from Tontitown. It’s a little too far to drive for a dinner and back.” But other fans pointed out they only stayed in Little Rock for a few weeks. One fan noted, “they live in Lowell its 18 miles from her parents and it’s where Josiah and Lauren live. They lived in Little Rock for 6 weeks over the summer because Derick had a summer job there.”

Another Duggar fan agreed and noted, “She just posted two weeks ago about her and Derick going and visiting Little Rock for the weekend.” When other people suggested the Duggar’s might celebrate on a different day, sharp-eyed fans pointed out that’s not the case. They all shared Thanksgiving photos on the same day. So, that led to some people hoping there’s not a big rift between Jill and her mom and dad. Some fans noticed we see little of them around Jim Bob and Michelle these days.

🍂We had a wonderful Friendsgiving yesterday! 🤗 Link in bio for pics and video or swipe up in my stories! ⬆️ www.dillardfamily.com …Haha and the boys had so much fun playing that they were so tired and ready for bed by the time we took this pic.

What do you think about Jill and Derick Dillard celebrating a Friendsgiving at home instead of going to the Duggars’ Thanksgiving celebration? Do you think there’s a bit of a rift between Jim Bob and Derick? Sound off your thoughts in the comments below.

Remember to check back with TV Shows Ace often for more news about Jill and Derick Dillard, and the rest of the Duggar family.

Tia Booth Spills Tea On Her Ex Colton Underwood
Matt Roloff’s Baby Has Finally Arrived After 9 Months
Why Are ‘Bringing Up Bates’ Fans Freaking Out Over Carlin’s New Pics?
‘Sister Wives’ Star Ysabel Brown Shares A Sweet Message To Her Mom
‘Deadliest Catch’ Junior Leaves A Gift On Keith’s Pot, What Is It?