Duggar fans are excited to hear that Josh and Anna’s sixth child is finally here! TV Shows Ace reported Wednesday that the newest addition and mom Anna are both healthy. Fans of the family are looking forward to seeing more updates about the baby girl. Anna shared two pictures of the baby girl, along with a caption. The mom of six wrote, “Maryella Hope arrived one day ahead of Thanksgiving Day 2019 and a great reminder to be grateful for all God has done for us! We are so excited and thankful to God for His special blessing giving us this precious, happy & healthy baby girl!”

When Josh and Anna revealed that their baby had arrived, they also shared her name, Maryella Hope. Fans are loving the new baby’s name. Duggar fans know that Josh and Anna’s children’s names all begin with the letter M. Their children include Mackynzie, Michael, Marcus, Meredith, and Mason. Since the couple announced they were expecting again, fans have been guessing possible names for the newest baby.

Now that she has a name, fans are asking about her name. Many fans believe she was named after the late Mary Duggar. According to Nameberry, Mariella means “bitter or wished-for child”.

Amy King is a cousin of the Duggar family. Her mother, Deanna, is Jim Bob’s sister. Though Amy was raised differently than the Duggar children were, they all seem to be on good terms. They often leave heartfelt comments on each other’s photos on social media.

Since Mary’s death, Duggar fans have been predicting that one of the new babies born soon will be named after her. Joe and Kendra named their daughter Addison Renee. Josiah and Lauren named their daughter Bella Milagro. Josh and Anna’s little girl was born most recently, and it seems that they decided to honor Josh’s late grandmother.

So far, the couple has yet to state that the baby was named after Grandma Mary. Fans are assuming that she is because their names are so similar.

On Wednesday, Amy shared a post on her Instagram story. The cousin wrote, “Maryella – what a beautiful name!!! Congrats to @annaduggar”. Because Amy shared this comment about the baby’s name, fans believe that the name is very important to the family. Amy and Grandma Mary were very close prior to her unexpected death. 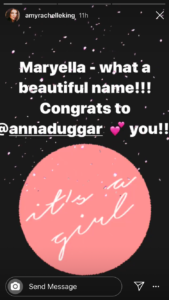 When Mary passed away, Anna shared sweet memories she and her children had with her. Other members of the Duggar family shared heartfelt messages and memories.

What do you think of Josh and Anna’s baby’s name? Do you think they named her after Grandma Mary Duggar? Leave a comment below and share your thoughts.