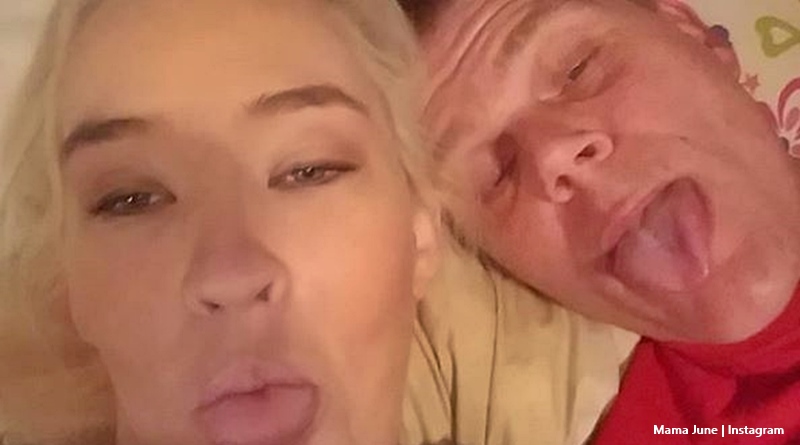 Mama June Shannon really slipped sideways in the last season of the WEtv show. We saw her and Geno arrested. Plus, it became obvious she was using cocaine. The family intervention failed and Honey Boo Boo went to live with her sister Pumpkin. Since then, Mama June hit the road in an RV with Geno Doak and seems estranged from her daughters. Now, it looks like they will spend Thanksgiving without their mom.

Mama June Shannon, estranged, could see the inside of jail

TV Shows Ace reported that Mama June and Geno got charged with possession of cocaine. Their lawyer “pleaded not guilty.” But, if convicted, she could spend a year in jail. Some fans think that’s a good thing as Mama June Shannon might then be forced to deal with her addiction. Also, they hope that separation from Geno might wake her up to the fact she’s estranged from her daughters. Actually, she’s also estranged from her other daughter Anna too. And, perhaps she also has little to do with her other daughter Jessica. On Instagram, Pumpkin and Honey Boo Boo often share about the tough time they go through.

Obviously, for them, mom June in jail is not a happy thought. But, in the meantime, they bravely help each other celebrate birthdays, and other events without her. And, it looks like it’s not going to be much of a family-styled Thanksgiving. That’s because it’s unlikely  June will pitch up to celebrate with them. Nevertheless, they plan to do something during the holiday.

Without A Crystal Ball on YouTube often follows Mama June Shannon and her family. Ahead of Thanksgiving, they said, “June has not posted anything to social media in months.” Plus they noted, “she seems to have fallen completely off the grid.” For Pumpkin and Honey Boo Boo, it’s probably a nice thing that apparently Jessica’s “reunited and connecting with her sisters.” Jessica Shannon has been sharing on her Instagram about her sisters.

Actually, Jessica wished Alana (Honey Boo Boo) the best on her birthday. That’s something June apparently forgot to do. Just recently, Jessica shared a photo of Pumpkin and her little kid, saying, “Love these ones like there my own.” Meanwhile, Pumpkin’s posting about her and Honey Boo Boo getting ready for the Christmas season without Mama June Shannon. So, hopefully, the two girls won’t be alone this Thanksgiving. Bear in mind that their Aunt Dodo also tried to get another intervention going. Maybe they can spend time with her and Jessica?

What do you think about Pumpkin and Alana and June’s other daughters probably not spending Thanksgiving with their mom? Do you hope that one day June reunites with them? Sound off your thoughts in the comments below.

Remember to check back with TV Shows Ace often for more news about the family of Mama June Shannon.