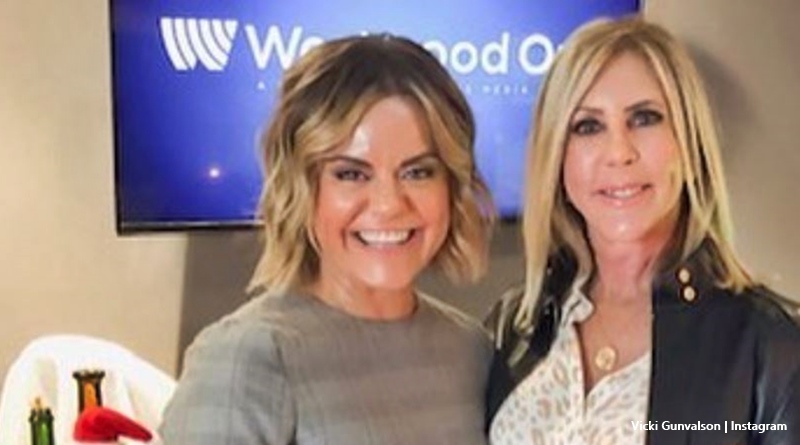 RHOC star Vicki Gunvalson might be an OG of the show, but she’s not just plumping herself down and crying about it. She took to her Instagram and announced a new podcast that she’s doing with Westwood One. And, she asked fans for some input which they appreciated a lot.

Some cast members of the real Housewives of Orange County might want to see the back of Vicki but fans don’t. Just recently, TV Shows Ace reported that “Emily Simpson wants Vicki Gunvalson to move on. She thinks it’s time for her costar to leave the Bravo series behind.” And, Vicki also said she’s got no interest in a full-time return to the Bravo show anyway. At the BravoCon this year, she made it clear she won’t return unless she gets back her position as a permanent housewife.

Emily got her message across via Bravo TV and said that she’d rather see Alexis Bellino return. Well, it looks like Vicki’s not too concerned about her co-star’s thoughts about her. And, it looks like she plans no wilted flower exit from her fans either. When she announced on Instagram about her new podcast, the RHOC OG appealed to those fans by asking them for input on the name of it. Actually, Tamra Judge came up with a name that loads of fans liked.

On her Instagram, Vicki Gunvalson wrote, “I have exciting news! I’m launching a PODCAST with @westwoodone! But I need your help… What should I name it?! Comment all your best ideas below.” She also tagged Kelli Hurley, saying, ” This is @kellihurley5, SVP of Digital Partnerships at @westwoodone and also my new friend!” Fans responded to Vicki, but one of the best came from Tamra Judge. She suggested the RHOC star call it, “Whooping it up with Vicki.”

Fans responded to Tamra’s suggestion. One said, “@tamrajudge yes that’s perfect!” Another agreed, noting, “Genius idea! “Vicky’s woo hoo” would’ve sounded like a different type of podcast altogether! 😂”  Another fan of both the RHOC stars said, “@tamrajudge that was my 1st thought for @vickigunvalson ❤ let’s hope you join her one day cause let’s face it, your show became great when you both became the dynamic duo that you are.”

The ‘Whooping it Up’ suggestion came from other fans, some liked it

“Whooping it up with OG of the OC” got a few nice comments. Actually, some RHOC fans liked it a lot. One other follower suggested, “Spilling the t with the og.” Another idea said, “‘What’s the Casserole’ with Vicki G!”

I have exciting news! I’m launching a PODCAST with @westwoodone! But I need your help… What should I name it?! Comment all your best ideas below ⬇️ _ Ps. This is @kellihurley5, SVP of Digital Partnerships at @westwoodone and also my new friend!

What do you think of these ideas? Do you like Tamra Judge’s suggestion for the new podcast that Vicky Gunvalson announced with Westwood One? Sound off your comments in the comments below.

Remember to check back with TV Shows Ace often for more news about the cast of RHOC.

Is It Too Late For Jill & Jessa Duggar To Sue Josh For 2002 Molestations?
Savannah Chrisley Slays In Fresh Updo With Fun & Flirty Style
Anna Duggar Shares Ironic Message With Inmates
‘LPBW’ Wait! Is Molly Roloff Headed Back To The Show?
‘Live Rescue:’ Will A&E Resuscitate The Series After The Pandemic?