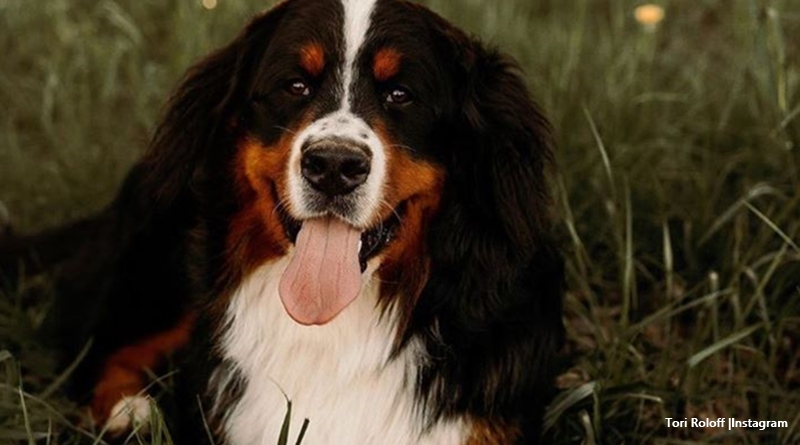 LPBW fans know that Tori Roloff owns a rather large dog called Murphy. Many times, fans criticized her for letting her son Jackson play with it. But, Tori assures people he would never hurt her boy. Now, her hubby Zach shared a photo of Murphy the dog and new baby Lilah. And, it looks like Murphy’s found another little kid he can protect.

TV Shows Ace reported that Tori’s been great about updating her fans on the new baby. Zach and Tori greeted their little one and quickly shared the first photos with their fans. We noted that over 30k people liked the pics and thousands of comments came in.  Since then she shared more pics and so has the rest of the family.  But the one Zach shared on Monday night was really cute. It showed Murphy looking all soppy and staring at Lilah.

The LPBW dad captioned it with, “Murphy is smitten with her.” The trolls that hit on Tori about Murphy and Jackson in previous posts seem to have disappeared. So, most fans were able to comment without trolls bleating about how dangerous the dog is. It got so bad at one stage, that one person actually told Tori they hoped the dog would bite Jackson to teach him a  lesson. That came about a year ago, but some people never let up on it. Popculture wrote in September that once again, Tori reassured critics that she would never put Jackson in danger. In fact, she noted, “They’re best friends. Know your dog and don’t judge me for what we do with our furry friend whom we trust with our child.”

This time, most comments about the Bernese mountain dog were complimentary and nice. One follower said, “That’s awesome that Murphy is smitten with her and he’s her protector.❤️❤️🙏.” Another Little People, Big World fan noted, “Omg she is adorable and I love how your dog just loves his siblings 🐶🥰.” Then, a loving LPBW fan said, “He’s the best omg!!!! He’s going to be Baby J and baby girls protector for life!!!” Well, many fans can’t wait to see the little girl grow up just like Jackson and start exploring the world with Murphy by her side.

It turns out that very often, Bernese mountain dogs fit in well with families and small kids. Kids Kiddle noted that the dogs originally came from Switzerland and “they are gentle, loyal, and good with children.” Originally bred as farm dogs and used for pulling carts, they need lots of room to run around. Certainly, Murphy gets that opportunity on the LPBW farm. For those who keep on warning Tori that Jackson should stop climbing on the dog, they noted, “they are patient dogs that take well to children climbing over them.”

What did you think about the photo Zach Roloff shared of Murphy and baby Lilah? Do you think it’s great she’ll grow up with her furry friend as her protector? Sound off your thoughts in the comments below.