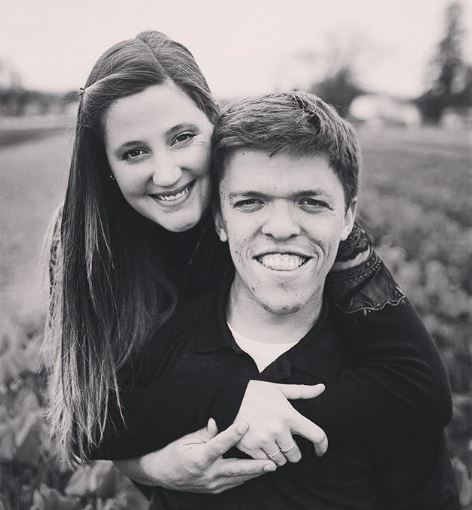 The news Roloff fans have been eagerly waiting for is finally here. Zach and Tori Roloff welcomed their daughter Lilah Ray into the world.

This transforms the reality TV family into a family of four as the bundle of joy has a 2 and half year old brother named Jackson Kyle.

A rep of the Little People, Big World couple confirmed exclusively to People Magazine that the baby girl was born on Tuesday, November 19th and 6:52 p.m.

Lilah Ray Roloff weighed 8 lbs, 9 oz and was 18 and a half inches long at the time of her birth.

“Zach and I are so excited to introduce you to our sweet baby girl Lilah. She has been the perfect addition to our family!” The mother of two gushed to People Magazine.

Lilah is younger sister to Jackson Kyle whom the couple welcomed into the world back in May of 2017. Like Zach, Jackson also has achondroplasia. Achondroplasia being a common form of dwarfism.

It was back in May, during a photo shoot with Jackson, that the couple announced they were expecting.

“Yay!! Tori and I are excited to announce that Jackson is going to be a big brother to a little sister!!” Zach exclaimed in the caption of the Instagram post.

Zachary and I are so excited to announce that Jackson is going to be a big brother! We are expecting a sweet baby girl this November! 🎀 Thank you so much for always supporting our family and loving us! #zandtpartyoffour #babyroloff #babyjroloff #moniqueserraphotography 📷: @moniqueserraphotography

The post featured a picture of Jackson rocking a “Big Brother” t-shirt.

“Zachary and I are so excited to announce that Jackson is going to be a big brother! We are expecting a sweet baby girl this November!”

Just a few minutes ago, Tori shared a sweet snap of their new baby girl on Instagram.

Less then 10 minutes ago, Tori took to Instagram to share a sweet snap of their new baby girl. In minutes, her followers showered the post with over 30,000 likes and nearly 2,000 comments. Everyone was quick to wish the mama a congratulations on her newest bundle of joy.

Unsurprisingly, many gushed over how adorable the youngest member of the Roloff family was. Several individuals specifically focused on how cute her little nose was.

Congratulations Zach and Tori Roloff! Stick with us at TV Shows Ace for the latest related to the Little People, Big World family. And, say congratulations to the lovely couple in the comments down below!