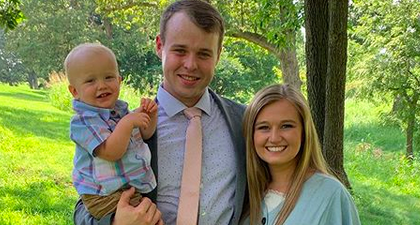 Fans of TLC’s Counting On know that there’s a Duggar baby boom right now. Kendra and Joe Duggar‘s family just grew. The couple is now parents of two young kids. Their first son, Garrett, is one-and-a-half years old. They named their second child, a baby girl, Addison Renee. She was born on November 2.

On Counting On, the birth of their second child was featured. During this online exclusive birth special, Kendra shared that the birth was traumatic. Prior to giving birth, Kendra took castor oil to speed up the delivery. Then, during the delivery, she was vomiting and suffering from dehydration.

A post shared by Joseph and Kendra Duggar (@littleduggarfamily)

During the delivery, Kendra told Joe, “I feel kinda nauseous. I don’t think I can do it. I just wanna cry.”

The birth was also difficult because the doctor was delivering another baby when Kendra arrived at the hospital. She went into labor four days before her due date. She said, “I need to push! I don’t wanna wait.” The nurses weren’t allowing her to push without the doctor being in the room though. Eventually, the nurses allowed Kendra to push. This was when Kendra said, “I know I wanted him here, but now I don’t really care.”

One of the producers mentioned, “Kendra has a history of holding her breath when she is in pain, which can lead to fainting. Her family is concerned that is going to happen while she’s in labor.”

Counting On — Kendra thought she was going to die

After the baby arrived, Kendra said to Joe, “Thank you for being there. Just helping me breathe. It’s incredible. I thought I was gonna die.” Not only was this traumatic for Kendra, but it was potentially dangerous for baby Addison. This could have meant serious health issues for Addison.

Fortunately, things seem to be going smoothly for the Counting On family. They recently shared that Garrett is “very interested in his new sister.” Kendra also said, “Addison Renee has made us a family of four and we are already so in love with her! She made a quick arrival in the early hours of the morning and has already melted our hearts.”

Prior to their daughter’s birth, they seemed confident that they could transition to two kids. Though there will be some ups and downs along the way, they seem to be off to a great start.

Are you surprised to hear about Kendra’s difficult delivery? Did you watch the birth special? Leave a comment to share your thoughts.

To watch the Counting On birth special, head to TLC.

Another ‘Bringing Up Bates’ Courtship May Be Brewing: See Photos
Jessa Seewald Trolls Sister Jana Duggar, And Fans Think It’s Hilarious
‘Below Deck Med’: Malia White Gets Shy Talking About Jake The Engineer
‘Bachelor In Paradise’ Cast Evacuated Due To A Tropical Storm
Lori Loughlin Is Back, Will Appear in ‘When Hope Calls’