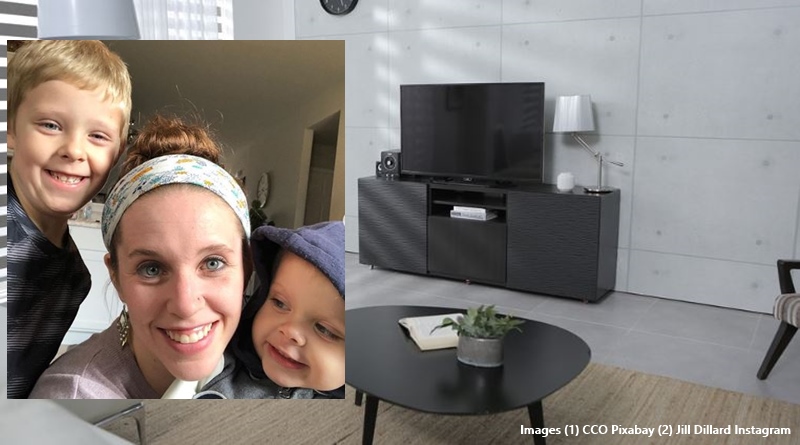 Jill Dillard took to her Instagram about her kids watching a TV show. However, they watch online rather than via television. In the post, she mentioned that the Duggar kids never actually watched their own show on TV when she was growing up. But, that doesn’t mean they never saw anything of the shows like 19 Kids and Counting and Counting On.

On Thursday night, Jill shared about her kids and something they watched. Notably, they don’t watch it on TV. She mentioned in the comments, “We just watched online on our laptop….haha. 🤗 Interesting side note, My hubby says he read something about it becoming more common for millennials to not have TVs.” In the main post, Jill shared a screenshot of a text message. It said that while she went off to do her makeup, she “put on one of the family shows for the boys.” Then she added, “Israel came running into the bathroom yelling, ‘Hey Mommy! Mommy! They said The Duggars!!’” In her main caption, Jill explained it a bit more.

Jill wrote, “Haha…This happened today…😄…idk if Israel remembers watching any episodes before today.” Then Jill added as aside. It read, “Fun fact: Growing up in the Duggar family, we were given the rough cuts of the shows before they aired and were able to edit a little if need be, but since we didn’t have TV ourselves we would usually only watch it on tv when visiting a relative, friend or at a hotel with cable. 🤗”

Amy King, Jill Dillard’s cousin who we saw in 19 Kids and Counting recalled the “watch parties.” She responded with, “I remember the watch parties! Just think how much has changed since then!” Naturally, Jill agreed with her. It’s interesting that Jill lets the kids watch the show, even online. But, we speculated that she’s a bit distanced from the family these days, so maybe she just follows her hubby Derick’s lead.

Cheatsheet noted, “Jill’s an adult now, and she doesn’t appear to have a television set in her family’s home. However, she hasn’t banned screen time entirely for her kids.” But watching online, or on TV seems tantamount to the same thing, really. In fact, these days millions of people do exactly that. And, it looks like Derick Dillards correct about fewer TV viewers.

Business Insider reported that TV time’s falling away these days. In their article back in August last year, they explained what’s happening. It seems that adults over 18 tend to still watch up to “five hours” daily. But, data from Statista showed “younger adults watch significantly less television.” They suggest it’s streaming services like Netflix that frees them up to watch on-the-go, or just use their laptops and phones to access shows they enjoy.

Jill Dillard and her family seem pretty normal these days when it comes to watching TV shows online. What do you think about the Duggar kids not actually watching their own episodes? Sound off your thoughts in the comments below.

Remember to check back with TV Shows Ace often for more news about Derick and Jill Dillard.