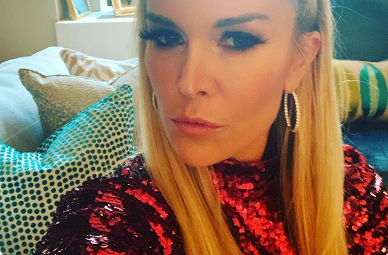 Does Tinsley Mortimer have plans of leaving the Real Housewives of New York? Rumors have been swirling that the reality star plans to leave the Bravo series after Season 12 since reuniting with her boyfriend Scott Kluth. This comes on the heels of BravoCon where the cast announced that Leah McSweeney, who joined the series in August, will be on the new season.

It’s already clear that Bethenny Frankel and Barbara Kavovit won’t be on Season 12 of The Real Housewives of New York. But, fans are also wondering if Tinsley Mortimer will stick around on the show after Season 12 ends. Rumors claimed that Tinsley may not return to RHONY after her alleged engagement to Scott.

According to Reality Blurb, Luann de Lesseps addressed the rumors about Tinsley’s exit at Friday’s BravoCon event. Luann claimed that when it comes to the state of Tinsley and Scott’s relationship, nothing ever lasts for long.

“You never know with Tinsley,” Luann said. “I hope and pray it works out this time around and, you know, the door is always open if she needs to come back.”

While Tinsley is currently shooting Season 12 of The Real Housewives of New York with her cast mates, her relationship status could reveal that she could leave the Big Apple behind. She has gotten back together with her on-and-off boyfriend, Scott, who lives in Chicago. That could mean she could move to the Windy City to make their relationship stick this time around.

“Scott and Tinsley are back together and they have never been happier,” an inside source told HollywoodLife.com.

“Tinsley is still filming and she is a Housewife for Season 12. Scott lives in Chicago and Tinsley will eventually be moving to Chicago to marry Scott which means beyond season 12 it will be impossible for her to be a New York Housewife.”

The couple was previously in a long-distance relationship that didn’t work out. They eventually split in October 2018. Tinsley confirmed their breakup on an episode of Watch What Happens Live but then revealed they’re in an on-and-off relationship due to the distance. Scott has also been causing drama with the RHONY cast, as Tinsley was seen arguing with fellow castmate Dorinda Medley on Sept. 18 while the cameras were rolling, as previously reported via TV Shows Ace.

Tisnley and Luann argued about the breakup.

Tinsley also argued with Luann about lying about her breakup with Scott. Prior to getting back together with Scott, the other castmates were reportedly “threatened” that she’s younger and hotter than them. But, Tinsley always claims that her ultimate goal is to get married and to have children.

What are your thoughts on Tinsley Mortimer? Do you think she will end up leaving the show? Sound off below in the comments section.

The Real Housewives of New York Season 12 will air on Bravo sometime next year. In the meantime, follow TV Shows Ace for updates and news on RHONY.