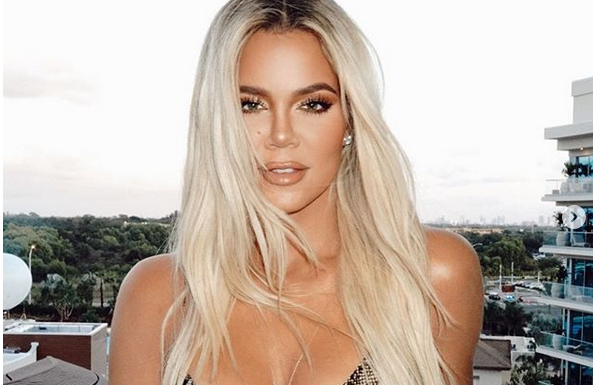 Khloe Kardashian dropped a major announcement on Sunday night’s episode of Keeping Up With the Kardashians. Fans who still watch this famous family may have heard the news of Khloe Kardashian’s upcoming spinoff. They had to hit the rewind button to make sure they were hearing it right. The reality star hinted about a secret project that she’s been working on with her daughter True Thompson for some time now.

As if the Kardashians need another television show. However, this new series is expected to be different from the others. It’s expected to feature her baby daughter True. The Kardashian-Jenner family sure likes to start them young in the entertainment business. On Sunday night’s episode, Khloe was seen obsessing over cleaning her home.

But it’s one segment that had fans wondering what she’s working on. According to People, Khloe had a production meeting with Kris Jenner where she said that she’s finally ready to “finalize the show that I’m developing.” The show in question appears to be a spin-off series, which is currently in development and will also star Khloe’s baby girl, True Thompson. It’s also been reported that the show is called Khloe & True Take the World.

It’s a play on the family’s previous spinoffs, Kourtney & Kim Take Miami and Kourtney & Khloe Take the Hamptons. But is it too soon for a 19-month-old to travel the world? As previously reported via TV Shows Ace, the famous mom already had the internet in an uproar about putting her baby on a diet. It’s likely that she’ll cause a reaction if she travels with her little one around the world.

♡ My baby bread baker!!! We bake bread together a few times a week ♡ I pray we continue this weekly tradition forever ♡

What went down on Sunday’s episode

On Sunday night’s episode of Keeping Up With the Kardashians, the producers were heard talking about the show and how they “want to shoot and put this on the internet as soon as possible.” They added that they wanted the episodes to be as short as “five-to-seven minute” episodes. It turns out the new series isn’t exactly about Khloe and True traveling the world. It’s going to be shot at Khloe’s home as it’ll document on their mother-daughter bond.

But this new show will not air on E! Instead, it will air as a short internet reality series on a platform like YouTube.

Khloe caught in the middle of Kim and Kourtney’s drama

That’s not all that happened on Sunday night’s episode. According to Entertainment Tonight, Khloe found herself in the middle of some family drama. The 35-year-old took some time to herself when Kim and Kourtney called her separately to rant about each other. Kim and Kourtney argued about the theme of their daughters, North and Penelope’s, joint birthday party.

Then the famous sisters took it one step further by calling Khloe separately about their inability to get along. Khloe looked frustrated as she said during their confessional they’re constantly dragging her into their fights.

What are your thoughts on Khloe’s new spinoff with True? Do you think it’s too soon to get her baby into show business? Or, do you think it’s a cute idea? Don’t forget to follow TV Shows Ace for the latest updates on Keeping Up With the Kardashians.

Erika Jayne Promotes ‘RHOBH’ Amid ‘The Housewife & The Hustler’ Debut
New Series ‘Love In Paradise’: Is It Just Another ’90 Day Fiance’ Spinoff?
Savannah Chrisley Gets Picked Up In New Guy’s Sweet Truck
Duggar Kids Preparing For End Of ‘Counting On?’ Looks That Way
This Is Why Tayshia Adams & Zac Clark Stopped Sharing Photos Together