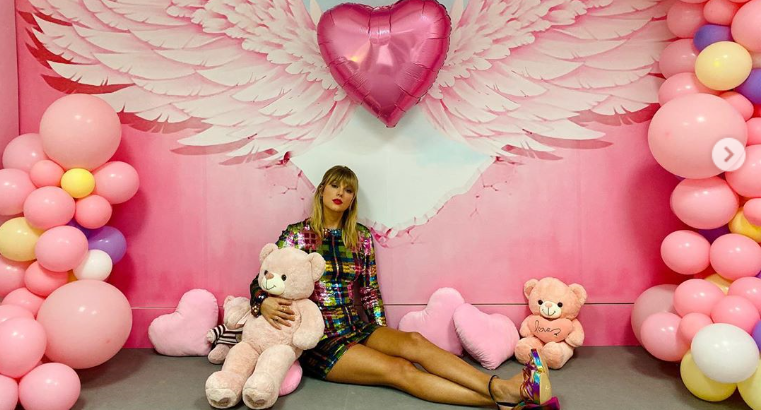 Taylor Swift has been fighting with her old record label about performing at the 2019 American Music Awards. As previously reported via TV Shows Ace, the pop star took to her Tumblr blog to reveal to fans that Scooter Braun and Scott Borchetta banned her from performing her old music at awards shows. Therefore, she also called her fans to take her side and to make noise about it.  Fans outrage apparently worked because Taylor can now perform her old hits at the AMAs.

On Monday, November 18, it came out the “Lover” singer will be able to perform some of her well-known songs. Taylor Swift’s former record label, Big Machine, released a statement to Entertainment Tonight.

“The Big Machine Label Group and Dick Clark Productions announce that they have come to terms on a licensing agreement that approves their artists’ performances to stream post-show and for re-broadcast on mutually approved platforms. This includes the upcoming American Music Awards performances,” the statement read. “It should be noted that recording artists do not need label approval for live performances on television or any other live media. Record label approval is only needed for contracted artists’ audio and visual recordings and in determining how those works are distributed.”

However, Dick Clark Productions and Big Machine Records revealed that they worked on a licensing agreement that allows their artists to perform live or at rebroadcasted events. This includes the American Music Awards. They also revealed that artists like Taylor Swift don’t have to ask for approval to perform their old music at an awards show or any other live televised event. Approval is only necessary for audio and visual recordings, depending on how the artist intends on using those works.

Ya could I get these to go?

Shania Twain will also perform a medley of her hits

Taylor Swift isn’t the only music queen to perform some of her greatest hits. Country superstar Shania Twain will be returning to the event for the first time in 16 years. As previously reported via People, Shania will perform a medley of her popular songs. Her return comes just before her Las Vegas residency. The residency should kick off in December.

Taylor Swift will receive the Artist of the Decade award, which is why her performance is such a big deal. She needs permission to perform some of her biggest hits. The hits include “Shake it Off,” “Love Story,” and “Look What You Made Me Do.”

Mark Bracco, executive vice president of programming and development, says he is excited to see her perform. “Taylor’s impact on music this decade is undeniable and her performances on the American Music Awards have been truly spectacular. We’re thrilled to honor her as our Artist of the Decade and can’t wait for her to blow everyone away with an epic, career-spanning performance unlike any other!”

Shania Twain and Taylor Swift will be joining a long list of star-studded performers. The others include Billie Eilish, Camila Cabello, Lizzo, Selena, Gomez, and Thomas Rhett. The 2019 American Music Awards will air live on ABC on Sunday, Nov. 24 at 8:00 p.m. EST. What are your thoughts on Taylor Swift performing at the AMAs? Sound off below and follow TV Shows Ace for more updates on the event.

MTV’s ‘Families of the Mafia’ Returns, Sammy “The Bull” Gravano Featured, Preview
‘Bachelor Klan’? Rachel Lindsay Burns Bachelor Nation To The Ground In Searing Interview
‘Autopsy: The Last Hours Of Dean Martin’ Where To Watch, What To Expect
‘The Bachelorette’ Katie Thurston’s Final Three Revealed
What Does Jacob Roloff Do For A Living & Does He Still Live In A Van?