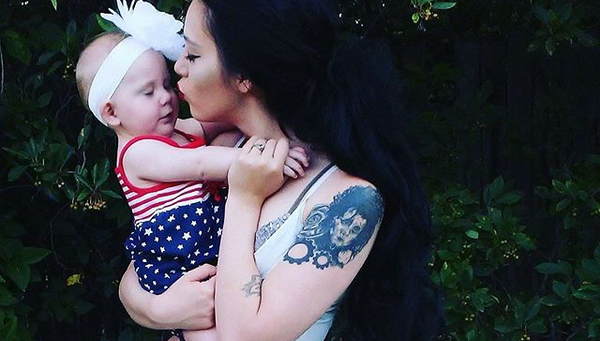 In the 90 Day Fiance: The Other Way “Tell-All” episode, Deavan Clegg shocked viewers when she revealed that she was pregnant with Jihoon’s baby following the birth of their first child. During that infamous and explosive episode, Jihoon joked that he has “super sperm.” Deavan Clegg has been upfront and honest about that pregnancy and miscarriage. She has also denied the rumors that she’s pregnant again following the loss of her child.

As previously reported via Reality TV World, Deavan set the rumors straight on Instagram Stories. This came after a photo surfaced of Deavan with 90 Day Fiance fans which sparked the apparent rumors about whether she was pregnant again. Deavan called the rumors “rude” and flat out denied that she was pregnant again. As for the photo in question, she revealed that she had “period bloat” at the time of the photo.

If Deavan Clegg was pregnant again with Jihoon’s baby, this would be their second child. Deavan is already a mom to three-year-old Drascilla from a previous relationship. The reality star has also welcomed a son, Taeyang, with Jihoon back in April. The two were seen getting married on the debut season of 90 Day Fiance: The Other Way.

Following the birth of Taeyang, rumors first emerged in September that Deavan was pregnant with her third child. While she confirmed those rumors in early October, she revealed that she didn’t want to speak any more about it because she has already gone through two “very hard complicated pregnancies already.” Inside sources revealed to In Touch Weekly that Deavan was keeping quiet because she’s been “struggling with a lot of issues from her previous pregnancy.” She took time away from the spotlight to “focus on her health and recovery.”

Unfortunately, Deavan announced to fans that she suffered a miscarriage on October 9. She’s been currently living in South Korea with Jihoon. As seen on the show, Deavan has been asking for Jihoon to provide for their family. Even though staying with Jihoon’s parents became too cracked for the newlyweds and their new bundle of joy, Deavan returned to South Korea after 90 Day Fiance: The Other Way “Tell-All” episode was filmed.

As previously reported via TV Shows Ace, there has been some confusion over the state of Deavan’s relationship with Jihoon. Back in September, Deavan shared a wedding photo of her with Jihoon. While the photo appeared to show them getting married, they never made their vows official yet. An additional wedding photo surfaced in September, which showed Deavan wearing a veil.

90 Day Fiance found out that this latest crop of photos was just a photoshoot as Deavan is seen wearing a wide variety of wedding dresses. Deavan has talked about her modeling career on the TLC series. However, some fans revealed that in Korean culture, couples often have more than one wedding ceremony. However, it seems like this couple hasn’t gotten married until October. It’s likely that it will be aired on Season 2 of 90 Day Fiance: The Other Way.

What are your thoughts on the pregnancy rumors surrounding Deavan Clegg and Jihoon? Sound off below in the comments section. And be sure to keep up with TV Shows Ace for more news and updates on 90 Day Fiance.