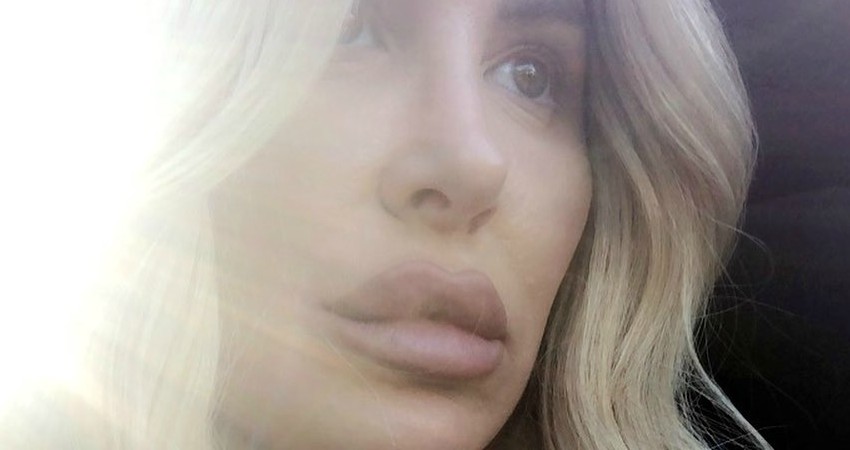 BravoCon is in full effect this weekend in NYC. Fan favorites and controversial stars of every Real Housewives franchise are featured on panels throughout the event. Friday morning kicked off with a panel of ‘OGs’ – those ladies who appeared on the original season of their respective cities.

Fans were treated to appearances by gone but not forgotten stars such as Caroline Manzo (RHONJ,) Kim Richards and Lisa Vanderpump (RHOBH.) Former The Real Housewives of Atlanta’s Kim Zolciak-Biermann was on hand in a slinky, revealing red dress.

The Don’t Be Tardy star shared a video of her and husband, Kroy Biermann, walking down a street in New York City.

During the panel, she opened up about the possibility of having a seventh child. Would the RHOA star consider adoption or surrogacy?

RHOA Star ‘On the Fence’ About Having Another Baby

As fans know, Kim already has six children. She has two daughters, Ariana and Brielle, from a previous relationship. After marrying Kroy, the couple had two sons before welcoming their twins, who turn six in a few weeks.

As her daughter Ariana heads to college, RHOA’s Kim is starting to get empty nest syndrome. She revealed during the BravoCon panel that they are considering adding a seventh child to their brood.

“We’re on the fence. I’m 41. I know the clock, it’s ticking along. You’ll see in about six months or so if I do decide. Kroy and I talk about it all the time. The kids are all in school.”

If she does choose to have another child, she has just one request: let it be a boy, please!

“If I do [have a another child], a boy though, please, because Kaia is going to be the death of me!”

Is Adoption or Surrogacy an Option?

Viewers may recall that Kim’s husband had a vasectomy back in 2014. How would the couple plan to have more children? The reality star reveals that reversing the vasectomy would be a “quick fix” and would be their first step.

Kim’s former The Real Housewives of Atlanta star Kandi Burruss recently announced another baby on the way via surrogacy. Would Kim ever consider that route?

According to People, adoption is on the table as an option, but surrogacy is not. Kim says that she is simply too much of a control freak to go that route. However, she gives props to anyone who does choose surrogacy.

“I’m such a control freak that I’d have to know what [the surrogate] was up to every day. ‘What are you eating? How are you sleeping?’ … I have to give it to people who can do it, like Kandi [Burruss]. I really could never do it.”

Kim recently faced mom-shaming backlash for allowing her five-year-old daughter to wear makeup and hair extensions. The public scrutiny has led to her children being victims of bullies. Her daughter Ariana has been bullied for her weight.

The “Don’t Be Tardy” singer reveals that her son, KJ, is often bullied for his size.

“KJ is big — he’s a whole head taller than anyone in his class. Than anyone in the grade, pretty much. So he’s dealt with the bullying when they have recess and they play football. They don’t want KJ to be the quarterback because he’s too big.”

According to Kim, she spoke with the school and nipped the bullying in the bud.

Kim’s Bravo spin-off, Don’t Be Tardy, is currently filming Season 8 to air sometime in 2020. She gave a “hard pass” at the idea of returning to The Real Housewives of Atlanta. Season 12 of RHOA airs Sundays on Bravo.