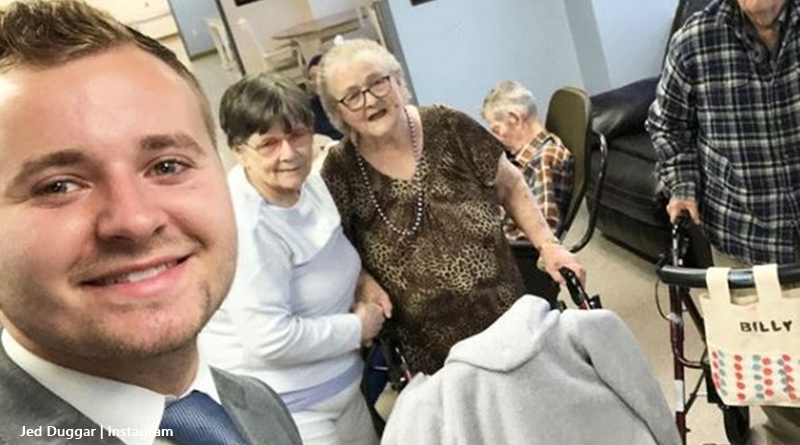 Counting On fans heard that Jedidiah Duggar plans a career in politics. Although just 20-years-old, he’s already running for public office in the Arkansas State House of Representatives. But, fans suspect that over on Instagram, he’s actually hamming it up for the political public, something a bit silly for a TV celebrity.

Counting On fans think Jedidiah hams it up for potential voters

TV Shows Ace reported that Jed Duggar, who his following in the footsteps of his dad Jim Bob posted about the veterans. In the report, we noted that some followers suggested he should join the military. Meanwhile, others felt he takes advantage of them for his politics. Now, they think he’s just hamming it up for the public with a post about his brother. They feel the Counting On star’s not being particularly clever with the political public as he’s a well-known TV celebrity.

Over on his Instagram, Jedidiah shared a photo of him and his twin Jeremiah. They ate lunch together at a local Springdale restaurant. In his caption, he wrote, “Always great to meet up with my twin brother Jeremiah for lunch! One of our favorite places in Springdale… Hard to beat the amazing food and service at Susan’s!” But, while that sounds like excellent conservative values that might appeal to the family man, fans think it’s simply ridiculous. after all, everyone knows both the boys live in the Counting On patriarch’s house, and actually share a room.

Fans spot the inference that he hardly ever sees Jeremiah

One fan started the comments off with, “You still live together. Doesn’t this happen a lot? Lol.” They added, “and they share a room. They see each other daily.” But one fan stuck up for him saying, “No. Jed has his own apartment.” But nobody believed them. However, as the fan who seems in the know noted, the Counting On star “has to be living in the district he’s running for. He’s running for 89th, his parents live in 84th district.” Others argued that he still remains at home, noting that this type of post just makes people think it’s for the voting public.

Meanwhile, Cheatsheet observed, “He may be trying to hide his living situation from the public, but since the entire Duggar family has been plastered across TV screens for the better part of two decades, his attempts are futile.” Actually, Whether he lives with Jeremiah or not’s making no difference to the critics. After all, everyone knows the Duggar family in Springdale’s very close. So, it’s hardly likely that Jeremiah seldom sees Jed.

Always great to meet up with my twin brother Jeremiah for lunch! 🍔🍳 One of our favorite places in Springdale… Hard to beat the amazing food and service at Susan’s! #southerncooking #sweettea

Politics takes the arena away from loyal TV fans

Some fans accused those people who noted Jedidiah lives at home of being trolls. But, calling critics trolls, really might be off the mark this time. You see, once someone enters the field of politics, people with the right to criticize candidates and the way they campaign won’t be silenced by television fans.

What do you think about Jedidiah Duggar’s post that he shared about lunch with his twin brother? Do you think he’s just hamming it up for the voting public? Sound off your thoughts in the comments below.

‘Unexpected’ Star Myrka Cantu Flaunts Diamond Ring – Is She Married?
‘Extreme Sisters:’ Why Do Patrix & Patrica Want To Move To Orlando?
Kim Kardashian Spills What She Wants From Her Next Husband
Candace Cameron Bure Shares She Censors Herself For The Kids
‘Bachelorette’ Fans Asked, We Answer: What Does ‘Sex-Positive’ Mean?