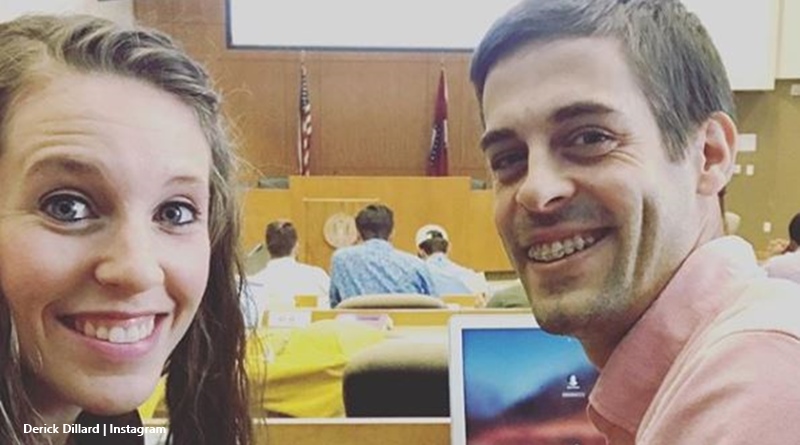 Counting On fans heard from Derick Dillard multiple times now that he denied being fired by TLC. They also know that he’s now well into his law studies. TV Shows Ace reported that he supports himself with a job while he studies. That being said, maybe he plans some legal action against TLC. In fact on his Twitter, he pretty much vowed as much, noting TLC “better lawyer up.” Plus, he said that “a storm” is coming.”

There’s a thread on Twitter that’s been up since about March last year. Basically, it started off with people asking about why Derick asked for money for hospital fees. Derick mentioned that TLC made a lot of money off the birth scene and he felt they could at least offer some compensation on the bill. Next, it came out that all the money for the show gets paid to Jim Bob Duggar. Obviously Derick’s got some problems with that.

But, it looks like Derick’s beef with TLC’s about to get much hotter. Derick returned to the thread on November 13. He wrote, “@TLC
has issues. They begged us not to quite filming but then didn’t want to talk directly with us about why. If money is all they care about, then it’s going to catch-up with them—you must care about ppl. All I’ve got to say is, they better lawyer-up b/c a storm is inevitable. (sic).”

Derick gets a reality check from a fan

As Cheatsheet noted, “Some fans believe that Derick’s statements suggest he plans to sue the media giant, but could that really happen? Derick didn’t go into specifics, but it’s unlikely that a network like TLC would film the couple without them both signing release forms. If Derick and Jill signed releases, there really is nothing that can be done on their part.” That’s a bit of a reality check.

But, one fan told Derick straight up that he’s not likely to win any kind of suit against the Counting On network. They wrote, “This is naive and not even a little bit true. TLC doesn’t owe you anything in our society. Discovery Inc. is lawyered to the brim. You have *nothing* on them, they would bury you in legal fees into oblivion. If you want to sue someone, sue your father in law.”

@TLC has issues. They begged us not to quite filming, but then didn’t want to talk directly with us about why. If money is all they care about, then it’s going to catch-up with them—you must care about ppl. All I’ve got to say is, they better lawyer-up b/c a storm is inevitable.

Why would Derick sue his father-in-law?

Fans wonder why Derick might have grounds for a suit against Jim Bob. Well, it’s well known that Jim Bob negotiated with TLC and signed the contracts on behalf of his family. In fact, he allegedly gets all the money for the show. How he distributes that is unknown. But, with Derick and his father-in-law not on friendly terms, maybe Derick got nothing.

What do you think about Derick Dillard threatening TLC, saying they “better lawyer up?” After all, Discovery’s got loads of professional lawyers. Sound off your thoughts in the comments below.

Remember to check back with TV Shows Ace often for more news about the cast of Counting On.