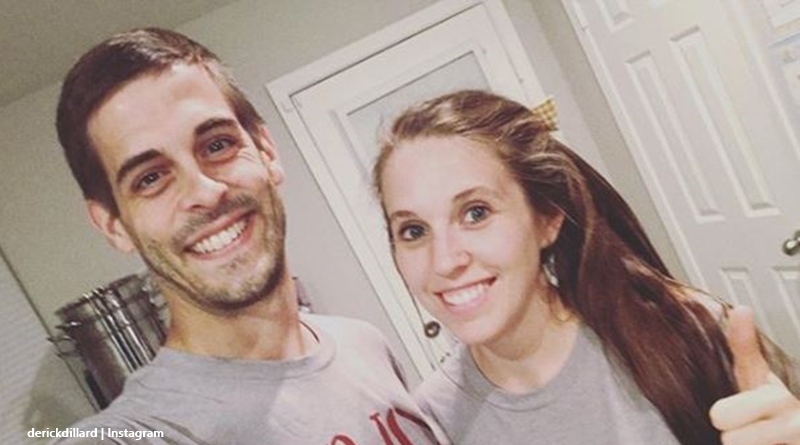 Counting On fans get very critical of Derick Dillard, often slamming him for living off his wife and not holding down a job. In fact, he’s studying and seems very strong on that. But, with few kudos going his way, he never defended himself for not working. However, in a surprise move, Derick posted that he not only earns some cash with Grubhub while he studies,  but he’s held several other jobs as well.

Taking to his Instagram on Friday, Derrick posted up a picture of him wearing his red shirt and carrying Grubhub bags. He captioned it with, “This is how I get date ideas! #food #letsdothis #studybreak How do you make extra cash? Would love to hear in the comments below.” He also used the hashtags, #daveramsey #millenialsmakinmoney #daveramseybabysteps. Of course, many Millenials know of Dave Ramsey’s popular The Million-Dollar Plan for Millennials.

But after their anger that Derick Dillard apparently had no job, some Counting On fans grew a bit angry with him. After all, he seemed unemployed after leaving the TLC show. One follower wrote, “did you just start? if you would have told us a long time ago what your job was you never mentioned all the naysayers wouldn’t have harassed you about if u worked lol. [I’ve] delivered with postmates a few times convenient easy money.” However, lots of people sounded happy and relieved that Dericks paying his pay, after all.

Grubhub food job for Derick – had others as well

According to their website, Grubhub’s “an American online and mobile food ordering and delivery marketplace that connects diners with local takeout restaurants. Based in Chicago, as of Q1 2019 the company has 19.9 million active users and 115,000 associated restaurants across 2,200 cities in the United States.” Some of Derick’s followers also make some cash working with Grubhub, and it seems a good way to earn some cash.

In reply to those who asked him why he never told Counting On fans he worked before, Derick revealed it’s not his first job. Derick said, ” I try not to respond to “haters” who don’t know what they’re talking about. I’ve had multiple jobs while in law school (most recently with the Arkansas Attorney General’s office).” He then added how he feels about sharing too much on social media. Derick noted, “I don’t believe people should post their whole life on social media and/or make assumptions based on a false belief that others post about their whole life.”

Keeping his life private, and it’s probably a good idea

Explaining why he keeps some things to himself, Derick wrote a bit more. He said, “I personally don’t post about most stuff going on in life because much of it is private and I wouldn’t share it on social media, even if some might make patently false accusations. Hope this helps.”

What do you think about Derick Dillard paying his way after all? It looks like he’s not shy to do ordinary cash-making jobs to earn while he learns. And, let’s face it, he already got a degree and holds a minister’s license. Were all those critics wrong? Obviously, he works hard at work and with his studies. Note, and without hanging onto Jim Bob’s purse strings either! Shout out your feelings in the comments below.

Remember to check back with TV Shows Ace often for more news about the Duggar family of Counting On.