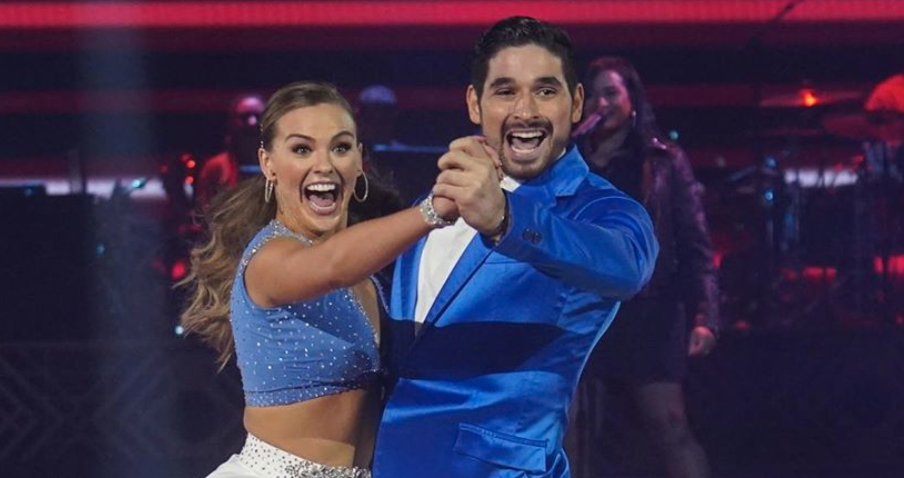 Hannah Brown has been doing really well on DWTS this season and even pro, Peta Murgatroyd, sees it. Apparently, Peta wants Hannah to win the whole competition this season.

Hannah Brown had a great night on DWTS and apparently she even has cast members rooting for her to take home the big win at the end. Honestly, it seems like she may have a great shot. Now, Peta is talking about what she thinks of Hannah Brown.

“I definitely have a special friendship with Hannah that started from the very beginning,” Peta said according to Showbiz Cheatsheet. “I think she’s a great girl. She’s such a hard worker. It’s insane the amount of hours that she is putting in and also coming from a reality show, ‘The Bachelorette,’ and coming on to another one, I think she has handled that so well. I’m rooting for her, because she’s got everything it takes to be the winner of ‘Dancing with the Stars.’”

How sweet is that? Peta is obviously a huge fan of Hannah’s. Peta isn’t just dissing her own partner though. Originally, Peta and Lamar Odom were partners. However, Lamar ended up being sent home. It may have been for the best, he wasn’t great at dancing. Now, it seems like Peta is team Hannah all the way.

However, Hannah isn’t the only talented dancer on the show. She has some stiff competition so there’s no telling if she will actually be the one to take home the mirror ball.

How has the show been going?

Hannah didn’t have the best week last week on the show, so her triumph this week must be a relief. Last week, Hannah took to Instagram to explain how she had been feeling while dancing through the show. It seems that maybe it wasn’t as easy for her as she let on.

“This experience has been harder than I could have ever imagined. When I decided to do DWTS I thought it would be a fun way to channel all my energy after a whirlwind experience as the Bachelorette. I was hopeful that the confidence I gained this year to take pride in the woman I have become would have the opportunity to shine, and I’d feel that reboot in my spirit after it took a bit of a beating after my bachelorette season,” she wrote in the post on Instagram.

This experience has been harder than I could have ever imagined. When I decided to do DWTS I thought it would be a fun way to channel all my energy after a whirlwind experience as the Bachelorette. I was hopeful that the confidence I gained this year to take pride in the woman I have become would have the opportunity to shine, and I’d feel that reboot in my spirit after it took a bit of a beating after my bachelorette season. I came into this experience a little broken and confused—more than I’ve shared. Everyday has brought its challenges with my past, my fears, and the uncomfortableness of opening myself up again to be judged on something VERY scary like learning a new skill to perform each week. Last night was really defeating for me and a lot of suppressed emotions started to surface from this amazing, but grueling experience. I want to be me. I want to be real. I feel my best when I feel like I have the opportunity to share my heart with others. But I know that’s been lacking in what has been seen on DWTS. It’s true there is a disconnect. I am busting my ass. I am giving this my all. It’s my focus and passion right now. But each week I fall flat. I’ve gotten to the point of being so anxious before I perform that I can’t completely enjoy it like I wish and know I could. I KNOW I have a lot more I can give. I want to be able to feel free and confident to dance with my whole heart. I’m working on getting there. I’m not throwing a pity party. I can take criticism and understand hard work…and I also know that my attitude has to change to rise above this slump I’m in. But this is real life. These are real emotions. It’s okay to be grateful and positive, while also acknowledging the hard days we all have. It’s so important to think positively, but it’s also important to acknowledge and feel all the feels. This pressure to pretend is not good for anyone. That’s how this crazy cycle of perfectionism continues to exist in a lot of us. I’m blown away by the support I see and feel from all of you who love me through it all. So thank you— here’s to another opportunity to grow. See y’all next Monday!

She continued to talk on how this season has been a struggle for her and she has to continue to learn each week. Not only that, but she deals with so much anxiety before every performance that she can’t even focus to enjoy her time on the show. That certainly explains why the judges said she felt disconnected from her moves last week.

Hopefully, Peta is right though and all this will end up being worth it for Hannah.

What do you think of Hannah on DWTS? Let us know what you think about the situation in the comments section below.

OMG!!! Is Hazel Busby Of ‘OutDaughtered’ Possessed?!
Duggar Fans Have A New Favorite Couple: Who Wins The Title?
Fans Praise Jessa Seewald For Living Like Everyone Else In New Photo
Disney Plus Drops ‘Luca’: Stream Or Skip? [Recap & Review]
‘Unexpected’ Alum Diego Reyes Reunites With His Daughter