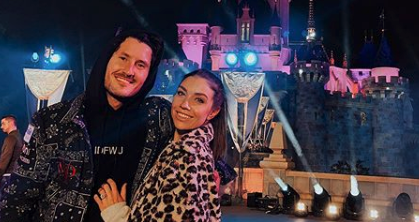 DWTS cast members, Jenna Johnson and Peta Murgatroyd have taken the next step in their relationship, AKA they want to be pregnant at the same time.

‘DWTS’ Stars aim for pregnancy at the same time

“Peta and I have a deal that we’re going to get pregnant together,” Jenna admitted according to Us Weekly.

How cute is that? Apparently, for Jenna, that might actually be right around the corner though. Her partner, Karamo Brown, said that Peta is about ready to have another baby. That means Jenna best be ready too.

That’s not all Karamo had to say about Jenna though. Apparently she has been super supportive of Karamo through all of this process. He basically can’t wait for her to get pregnant at this point. As long as that’s what she wants, then she should totally go for it. She would be a super cute mom after all.

“She’s been so supportive to me and been so great in this entire process. On top of loving Dancing With the Stars and loving this whole journey, having a partner who says ‘You can do it,’ I’m like, ‘I know what you’re going to be like as a mother.’ Literally, let’s start.”

Comparison is the worst thing anyone can put themselves through – I know because I’ve lived a life of comparison for SO many years. I’m so happy those days are mostly behind me, but the progress doesn’t happen over night. Mental health is a unique journey we’re all on. Some days I need to cry four times, other days I feel like the luckiest girl on earth. What’s most important is that you find your own journey, and find what works for you. Be patient with yourself ❤️ . 📷 @ashleyrobertsphotos, full feature in @womansdaymag

So what does Peta think of all this? Well, she wants to give her two-year-old son a sibling so she’s definitely thinking about having another child. She says she may actually have time to have another one before the next season so it’s perfect. There could be two new dancing babies before the next DWTS season! Especially if they stick to their pregnancy pact.

“We’re talking about it now and trying to — it sounds crazy — schedule it in. The next season will probably be in fall again so, can I fit a baby in before then? Probably can, so we’ll see if it’s doable, yeah,” Peta admitted.

However, she did go on to make it clear that while she is excited for a second child, a third one can hold off for a while. That’s pretty understandable. You have to get through the second kid before even thinking of adding a third.

Do you want Jenna and Peta to get pregnant at the same time? Who is your favorite couple on DWTS this season? Let us know all your thoughts in the comments below. Be sure to come back to TV Shows Ace for news on all of your favorite reality TV stars.