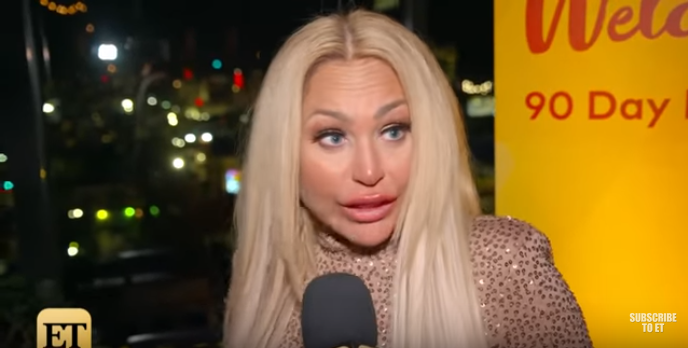 90 Day Fiance star Darcey Silva has opened up about her thoughts on the Before the 90 Days “Tell-All.” She also didn’t hold back on her thoughts on Angela Deem defending her ex-fiancé Jesse. The episode got so wild that Angela had to be removed from the studio. Even Avery Mills revealed on social media that TLC forgot to leave in the part where Angela allegedly attacked her and her mother.

It all happened the moment when Jesse Meester showed up to the TLC studios. The 54-year-old reality star had to be escorted from the studio after she shouted after Avery Mills and Tim Malcolm for supporting Darcey Silva. Angela accused everyone of “bullying” Jesse and didn’t back down when another castmate, Rebecca Parrott, stood up to her.

Viewers of 90 Day Fiance: Before the 90 Days were not happy with Part 2 of the “Tell-All” when Angela Deem got into a fight with her fellow castmates. Ever since that episode aired on Oct. 28, fans have been calling for a boycott of the 90 Day Fiance Season 7 series, which also features Angela and her Nigerian fiancé Michael. Other fans have been tirelessly posting petitions asking TLC to remove Angela from their spinoffs, as previously reported by TV Shows Ace.

Darcey is sharing her feelings on that emotional “Tell-All.” In a new interview with HollywoodLife, she seems to be over the drama. The 45-year-old 90 Day Fiance star doesn’t understand why that situation got so out of control. She told the celebrity gossip blog that everything happened so fast that she didn’t have time to think. There were already high tensions in the studio, long before Jesse arrived. However, there was no excuse for what went on. Darcey isn’t happy with the way everything unraveled.

TLC producers did their best to keep Jesse away from Darcey and her new boyfriend Tom Brooks. But they didn’t succeed when it came to the wrath of Angela. As Darcey and Tom spoke to host Shaun Robinson, things got heated in the green. There were scenes of Avery leaving in tears. The couple didn’t understand what was going on behind the scenes until they finished filming their segment.

Several days after the show aired, Darcey revealed she doesn’t understand why Angela defended Jesse so much. However, the two are still on friendly terms. Darcey told HollywoodLife that she’s still very confused about the way everything went down. She never wants to wish anyone ill intentions. If anything, she wants to keep the peace.

It’s insane that the drama happened all because Jesse walked into the green room and sat down. Darcey agrees that everyone has a right to share his or her story on the “Tell-All” as long as no one gets hurt. It’s all about wanting the same thing at the end of the day, which is love. But Darcey still feels the real reason why Jesse showed up to the reunion was to “shame and bash” her “for his own benefit.”

She’s grateful that Avery and Tim defended her and questioned Jesse about his motives. As for Angela Deem and Michael Ilesanmi, the two are currently on the new season of 90 Day Fiance. In the seventh season, the couple is seen making their love official on U.S. soil. There has also been previews of Angela getting Botox and having more relationship trouble.