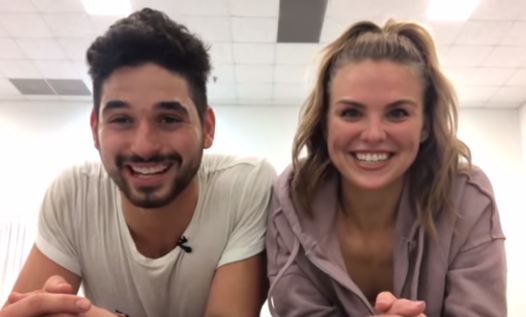 Three years into his career as a Dancing With the Stars pro, Alan Bersten may be getting his mirrorball trophy at 25-years-old.

Alan Bersten And Hannah Brown Take Their Friendship To The Stage

Bersten and his partner, the former Bachelorette, Hannah Brown have quickly become fan favorites of this season. Despite recently receiving some unexpected judgment, the duo started the competition strong, continuing to receive high scores each week. Brown feels some of the judgment could have come from the judges believing she’s more experienced. Regardless, the pair has a strong working relationship and amazing chemistry, proven in their dances.

Alan Bersten said he and Brown became friends quickly and he feels that has made a great positive impact on their performances. Both of them are very detail-oriented, resulting in high-quality performances week after week from each of them.

“Honestly it’s very funny, we both have the same personality where we want to be the best but we’re also perfectionists. We’re very hard on ourselves,” Alan said.  “So when it’s good, it’s going so well and we’re getting so much done. But the second we both kind of get into that mindset of ‘It could be better, it could be better,’ or, ‘We need to do this better,’ that’s kind of when it becomes a little bit harder to get through.”

The  Judges Are ‘More Accountable’ Now With The New Rule

According to Woman’s Day, this season has seen some behind-the-scenes shakeups with a new judging rule that his been put into place. It allows the judges to have the final say on which of the bottom two contestants go home.

“You know I think any change is a good opportunity to grow. I honestly love the new judges rule,” Bersten said. “It puts a lot more accountability on them, you know, they’re the ones giving the scores, they’re influencing the people.”

As for the creative changes, the judges now have complete control over the performance. They choose the costumes, music, and set, leaving the choreography up to the dancers who previously had total control. Bersten said he couldn’t be happier with the change and the creative team who oversees those aspects.

“With the music and the costumes, I feel like the creative team is doing a great job picking really iconic songs that really resonate with people,” he said.

Although this season is a blast for Alan Bersten, he’s excited to hit the road early next year for the Dancing With the Stars tour. Beginning in January, Bersten and his castmates will hop on the tour buses to perform all across the country in 60 different cities.

This extensive and physically demanding tour would be daunting to the average person, but Bersten absolutely loves it.

“Honestly the tour is my most favorite part of the year,” he said. “You know, I love being on the TV show, but when we go out there on tour and every night in a new city we get to meet these amazing fans and we just go on stage and dance and have fun, it is honestly like a celebration.”

Make sure you don’t miss new episodes of Dancing With the Stars on Monday nights. Everyone can’t wait to see if Hannah B will win this season.