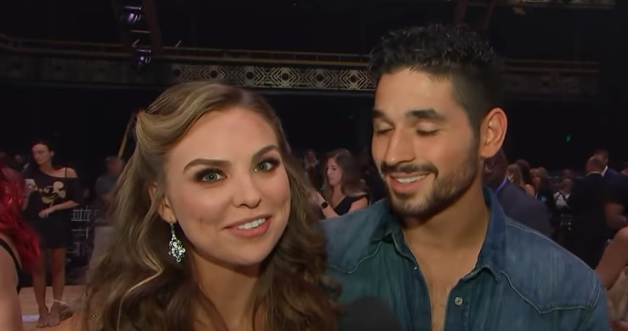 Not only has former Bachelorette star Hannah Brown been impressing fans of Dancing With the Stars with her dance moves, but her costumes as well!

Every week has been another stunning outfit with gowns, skirts, and ensembles that all deserve a perfect 10.

The 25-year-old Bachelor Nation star and her partner, Alan Bersten have been on the top of the leaderboard all season, the fans continue to love them. Their hard work is definitely paying off, spending hours in the studio and working until they literally can’t feel their feet anymore. “My feet, like I don’t really feel them anymore,” Hannah Brown said during a group interview on October 14th.

Alan’s career has been professional dancing. But Hannah Brown says his advice hasn’t always been the most helpful. “He just says, ‘You’re fine!’” she stated. The pro really did have some tricks to help Hannah after she said her feet were getting a beating. “You know, the blisters obviously come with the different shoes and that’s … how to get rid of blisters,” Alan said. “But for the body, like obviously the whole body hurts. It’s important to ice and heat and take Epsom salt baths.”

We’re bringing some magic to ya tonight— IT’S DISNEY NIGHT! ✨

Working on herself was the beginning of her journey toward winning

Precautions have been taken by Hannah to avoid serious injury occurring from the soreness she’s been dealing with. “My legs hurt really bad. So we just make sure that I, you know, have massages and see … a physical therapist and do the ice baths and saunas. All this stuff to keep me going. So definitely staying on top of it,” she explained.

Hannah Brown has been doing great this season, aside from her aches and pains. According to Life & Style, Hannah had set her sights on reconnecting with herself before she started to aim for the mirror ball trophy. “I’m truly just focused on continuing to love myself and see the places where I still need to work on that — and I think this is the way where I can do that,” she said.

On the October 28th episode, Hannah played a zombie beauty queen for the Halloween themed episode. She made the striking choice of wearing high-top sneakers rather than heels for her jazz number to the Donna Summer hit, “Bad Girls.”

Hannah also did a group dance number with some of her co-stars, James Van Der Beek, Ally Brooke, and Lauren Alaina. The whole crew had on matching navy blue velvet suits and they couldn’t have looked better.