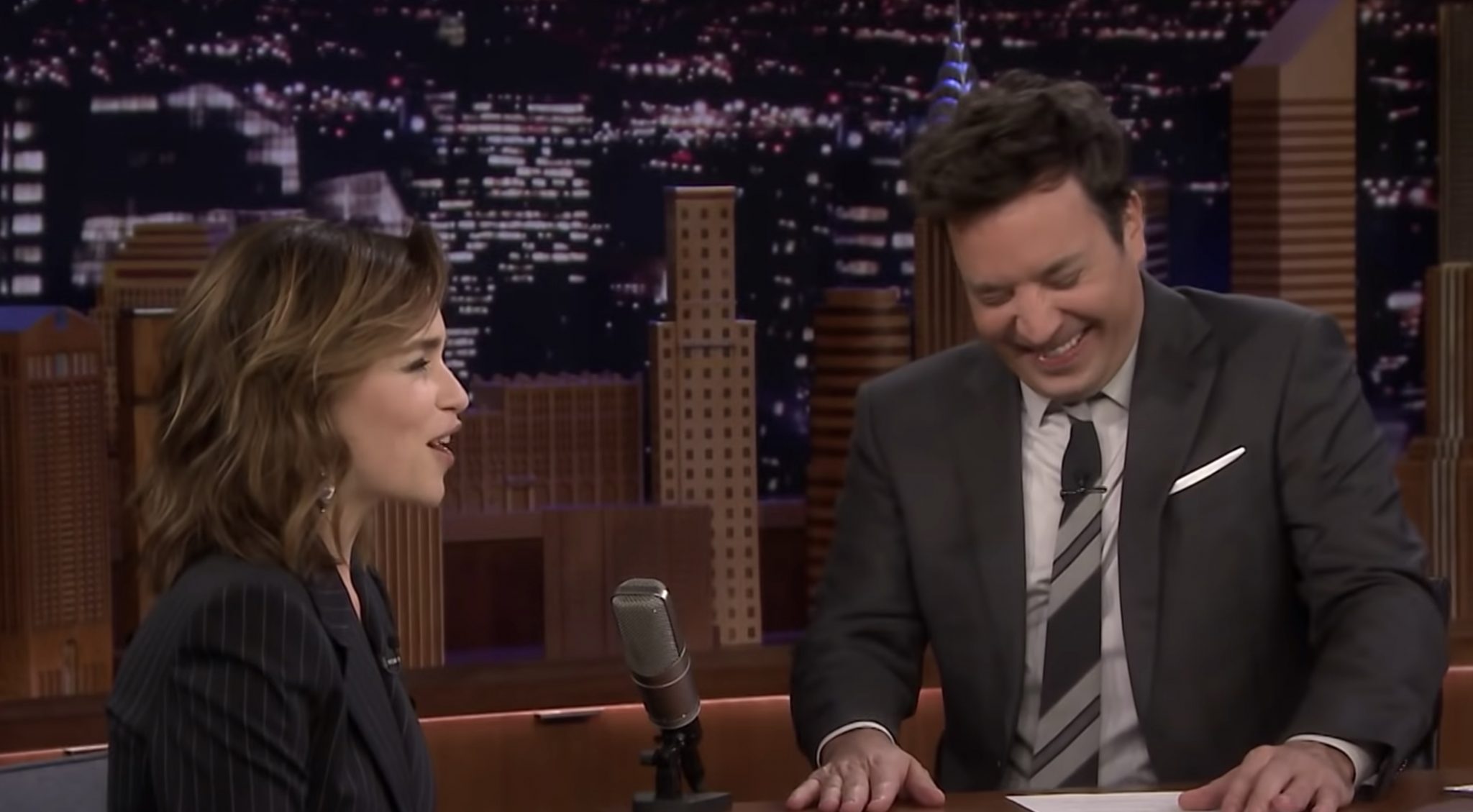 Game of Thrones fans were upset with how it ended and blamed sloppy details like the GoT coffee cup as a metaphor for all that was wrong with the final GoT episodes. In the episode “The Last of the Starks,” the coffee cup was in front of Emilia Clarke and in full view to GoT fans. So, it was no shocker that Sophie Turner had told Jimmy Fallon that it was Emilia’s cup. But, defending herself, Emilia has identified another castmate responsible for Coffegate. Who left the GoT cup on set?

The beginnings of Coffegate began in May with “The Last of the Starks” episode. This was the fourth episode of Game of Thrones Season 8 that aired on May 5. Fans were disappointed with the dark cinematography and numerous issues with the story-lines. During Season 8, That coffee cup became the metaphor for the disappointing Game of Thrones ending.

Just a few days after the coffee cup was spotted, Sophie Turner happened to be on The Tonight Show with Jimmy Fallon, promoting her movie, Dark Phoenix. Despite the caché of her promoting an X-Men film, Jimmy Fallon showed her a photo, holding a coffee cup. Sophie sheepishly pointed out that the cup was in fact in front of Emilia Clarke.

Sophie also did reveal that the cup was part of a GoT cast text discussion. Sophia said that Nikolaj Coster-Waldau, who plays Jaime Lannister, slyly wrote:”Great episode. Is that a coffee cup?”

Game of Thrones may have ended months ago, but Coffeegate is still unsolved. Detective Jimmy Fallon was determined to get to the bottom of this! Recently, when Emilia Clarke was out promoting her new romcom, Last Christmas and she appeared on Jimmy Fallon. Fallon chatted with the 33-year old about Coffeegate.

Fallon first taunted Clarke with that video of Sophie Turner laughingly accusing Emilia of being responsible for leaving the GoT coffee cup on the table.

Emilia then revealed that it was in fact Conleth Hill’s cup. The actor who plays Varys confessed to Emilie at a party that it was indeed, his coffee cup.

“Here’s the truth: We had a party before the Emmys recently and Conleth, who plays Varys — who’s sitting next to me in that scene — he pulls me aside and he’s like, ‘Emilia, I have got to tell you something, love. The coffee cup was mine.'”

Emilia couldn’t contain her mirth as she exclaimed, “It was his! It was Conleth’s coffee cup! He said so.” She did admit that he had been drinking a bit when he told her it was his cup. So, it seems that the coffee cup GoT mystery remains unsolved.

The new mystery that may be overshadowing Coffegate is the new GoT prequel, House of the Dragon? TV Shows Ace revealed that Emilie has feigned ignorance, but she did find that the cancelation of Bloodmoon, the Naomi Watts GoT prequel “astonishing.”

‘MAFS’ Virginia Coombs Spotted With Ring On THAT Finger Post Split
How Caelynn Miller-Keyes Felt About Dean’s ‘Suffocating’ Comment
Former ‘Unexpected’ Star Lexus Scheller Is A Mom Again
Is Natasha Parker Open To Being ‘The Bachelorette’ After ‘BIP’ Drama?
‘Deadliest Catch’ Exclusive: The Worst Is Yet To Come In Nail-biting Season 17 Finale