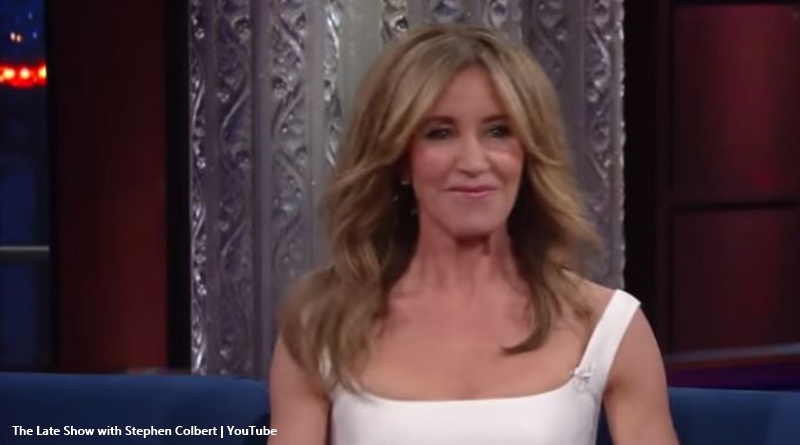 Felicity Huffman served a slightly shorter sentence for her part in the College Admissions Scandal than expected.

TV Shows Ace reported, “Apparently, the reason for it relates to the weekend releases. All weekenders get out on Friday, according to the prison officials.”

Now, she and her husband William H. Macy went out in public together for the first time since her Friday release.

Yahoo carried the Entertainment Tonight article that noted the couple got snapped outside a” superior courthouse in Los Angeles, California, on Monday.”

Both of them wore dark glasses, but the famous face stood out anyway.

Back in May, Felicity Huffman plead guilty. She agreed she paid $15,000 to Rick Singer who arranged the correct answers on her daughter’s SAT test. By September, she learned of her sentence in federal prison for two weeks.

Other punishments included 250 hours of community service and a $30,000 fine. Supervision for a year also follows. But, the prison term probably worried her the most.

Prison behind her, Felicity Huffman pays debt to society

People reported that Felicity Huffman felt “embarrassed.” Their source added, “She wants to serve her time and move forward.” Felicity put the prison time behind her now, unlike Lori Loughlin. Lori pleaded not guilty for a much bigger offense. If she gets a prison term, it might amount to many years. But, Lori Louhgin, in contrast, believes a rather topsy-turvy version. She sees herself as a victim, not the law-breaker. If she can’t prove that, then Felicity’s sentence could look minuscule in comparison. Possibly, we won’t see Lori out in public for a very long time.

Other people charged in the college scandal include non-actors and actresses. Insider wrote, “More than 50 people” faced charges for “participating in the college admissions scandal.” They reminded us that the scheme “involved bribery, money laundering, and document fabrication.”Students ended up admitted to elite colleges.”

They included a physician from California, the founder, chairman, and CEO of Hercules Capital, and a California vineyard owner.

Things look worse for Lori each time we hear about her. Time reported last week that “Loughlin and her husband, fashion designer Mossimo Giannulli, were among 11 parents indicted in the new charges on Tuesday.” The outlet noted, “Loughlin’s next turn in court comes on Jan. 17, 2020, at 11 a.m., for a status conference.” However, she might not personally attend, according to the Department of Justice.

What do you think about Felicity Huffman being seen out in public for the first time since she left prison? Do you appreciate that she owned up to her guilt and pays for her crime? Sound off your thoughts in the comments below.

Remember to check back with TV Shows Ace often for more news about Felicity Huffman.