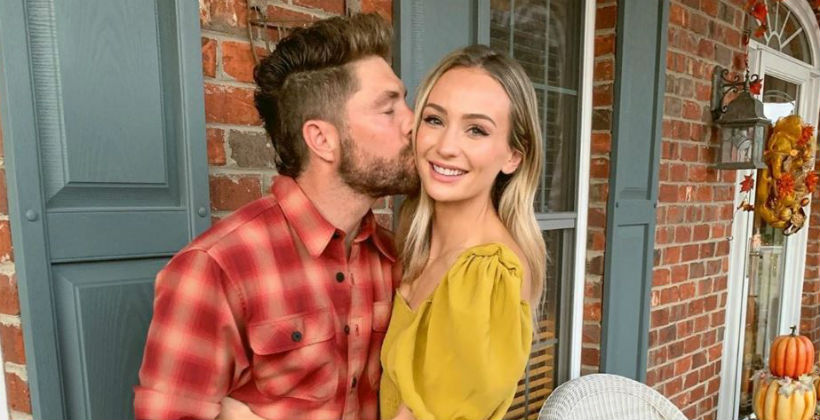 It was not a long engagement for country singer Chris Lane and Bachelor alum Lauren Bushnell. Just four short months after proposing, Chris and Lauren are married. The couple wed in a secret garden ceremony tonight, October 25.

Chris and Lauren’s romance has been fast all along. The couple went public with their relationship less than a year ago. They moved in together in March. Chris popped the question in June. Now, four months later they are husband and wife.

People shared the news of their wedding. Chris and Lauren got married tonight with 160 of their closest friends and family in attendance. Their ceremony was in Nashville, where both of them call home.

Obviously, both Chris and Lauren are excited to be man and wife. Chris said, “I’ve just looked forward to the day for quite some time and I’m glad that it’s finally here. I feel like I’m the luckiest guy in the world to be marrying her.”

Lauren also commented saying, “I feel like the luckiest girl. We both recognize what we have is special, and we feel very lucky.”

Her dress was elegant.  Nashville designer Olia Zavozina designed Lauren’s gown. It was a silk white gown with a long train. The veil she wore was even longer than her train. To add extra sentiment to the gown, Lauren had buttons from her mother’s wedding dress incorporated into her gown.

The reception following their vows included a formal dinner. The menu featured roast chicken, beef filets, Parmesan risotto, asparagus and strawberry shortcake for dessert. There also was a traditional white wedding cake, with salted caramel buttercream filling. To top it all off the couple had a Shake Shack truck show up for late night snacks.

Engagement photos can be pretty cheesy..but i Liked this one! Shows how happy she makes me 🙏🏻 📷 @darlingjulietphoto @laurenbushnell

How Lauren and Chris got together

While it may seem that Chris and Lauren have had a fast romance, they have actually known each other since 2015. It wasn’t until 2018 that Chris invited Lauren to join him and some friends on a Bahama vacation. She accepted.

They realized they were attracted to each other but Chris wasn’t really looking for forever. Lauren said, “He talked about how he wanted to be single forever, how he didn’t know if he wanted kids. Chris decided to use our entire trip to completely scare me away.” It didn’t work and now the two have vowed to be together forever.

Once the vacation was over Chris and Lauren started talking more and more. By the beginning of 2019 Lauren was packing her bags in Los Angeles and moving to Nashville to be with Chris. They even began ring shopping. Chris said he wanted to ensure the ring she got was exactly what she wanted.

He popped the question

On June 16, Chris proposed to Lauren. He surprised her at her parents house in Oregon. She had no clue what was going on. Lauren of course said yes and the wedding planning began. With the help of Nashville wedding planner Josiah Carr of Ninth & Everett, the wedding was planned and perfect just four months later.

Congrats to Chris and Lauren.