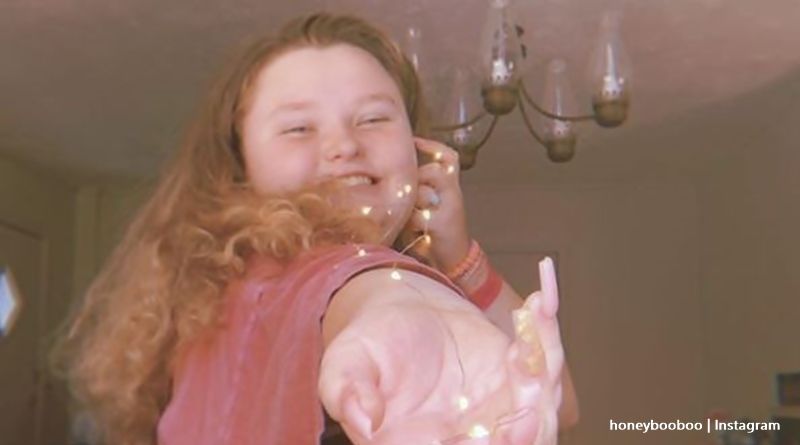 Honey Boo Boo fans know that her sister Pumpkin’s working on getting her weight down. Conscious of her health these days, she started doing Boom Bod promos. And, she’s losing some weight. Regular posts shared show that while it’s a long journey, she’s making an effort. Meanwhile, this summer, Honey Boo Boo started on Fab Fit Fun. These are beauty, fashion, fitness, and wellness products. So, it looks like both of Mama June’s daughters make an effort at slimming down. But, maybe those who commented about Honey Boo Boo’s size never knew that. Needless to say, loyal fans slammed them for body-shaming a teen.

Honey Boo Boo photo that started it all on Instagram

Over on Instagram, Pumpkin shared a photo of her and her sister at Krab Queenz Los Angeles. The photo from earlier this summer showed Pumpkin and her sister Honey Boo Boo. Honey Boo Boo wore a yellow tee, denim shorts, and a very pretty smile. A bit of a throwback photo, Pumpkin captioned it with, “Sister appreciation post! I love you so much Boo Boo.” So, it’s not a current photo. But, some people felt they should share their opinions of Honey Boo Boo and her weight.

Sometimes people mean well, but it doesn’t go down well with loyal fans. After all, Honey Boo Boo very likely sees Pumpkin’s posts, and she’s only 14. Disguised as a sort “someone has to tell her, cos I care about her health,” comment, it was not appreciated. Loyal fans got furious as no matter how well-meant it’s simply not right to call out a teen about her body on social media. And, certainly not on Pumpkin’s personal IG page

Despite claiming the comments about Honey Boo Boo were there because June and the rest of the family don’t do anything, fans were not having it. One fan said, “I think that’s rude.. things like that should be not said on an open platform… embarrassing I’m sure for @honeybooboo. She is told this all the time.” Another fan noted, “it’s rude period. Do you think she doesn’t know and her family doesn’t know she has a weight issue? Do you think her family doesn’t worry about her health? Stop fat shaming. Seriously rude.” A few other followers agreed with the person who started off being critical, but they seemed to be in the minority.

Another Honey Boo Boo fan got to the point of something that they felt important. The follower said, “I’m sure getting on social media and seeing all you self righteous so called do gooders who have her ‘best interest’ at heart is real freaking healthy for her 🙄 You should all be ashamed for publicly passing judgement on a child’s appearance. How would you feel if that was your child being spoken negatively about?”

Sister appreciation post! I love you so much Boo Boo @honeybooboo #ladays #letsgoback

The same fan continued their post, as they felt it’s so wrong to get all negative. They continued, “Even if people veiled their negativity as concern, the kid has been through hell and back so let’s all make a big fuss on Instagram and make her feel like shit. Jesus. She’s beautiful, sweet, kind, funny, smart, and looks very happy with Pumpkin who’s doing a wonderful job raising her. Something she shouldn’t even be tasked with. No why don’t all of you who get off on judging others go clean your own back porches cause I know every single one of you have problems of your own they just aren’t public knowledge.”

What do you think about the fans who stepped up for Honey Boo Boo? Do you agree that social media’s not the place to body shame anyone, even if couched as a concern? After all, Pumpkin’s making a real effort to slim down, and she’s obviously gotten Alana interested in the Fab Fit Fun package as well. Sound off your thoughts in the comments below.

Remember to check back with TV Shows Ace often for more news about Pumpkin and her little sister Honey Boo Boo.