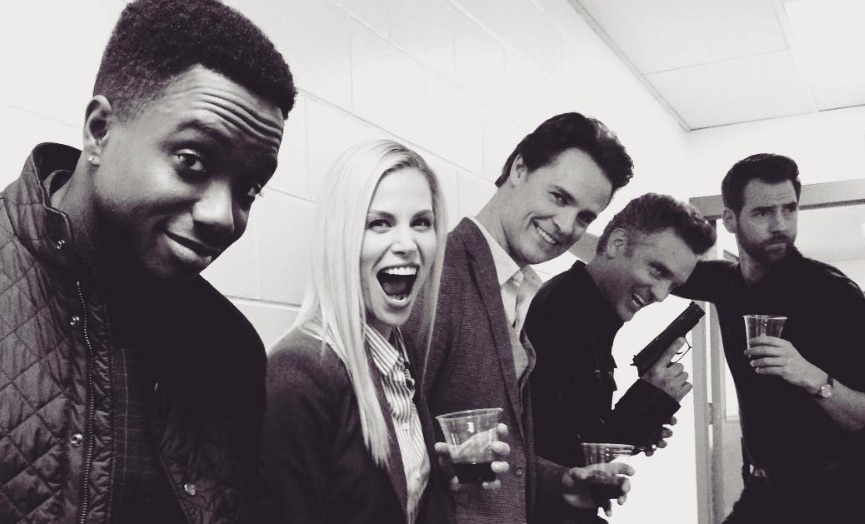 On Sunday, Dylan Neal, star and executive producer of The Gourmet Detective series shared that the fifth installment of the mystery series, the Cajun-infused Roux The Day, will begin pre-production this week. Neal, who portrays the culinary consultant, Henry Ross, also answered some questions from fans, including our intrepid TV Shows Ace writer. What did Dylan share about the new Gourmet Detective mystery and when will fans get to see it air on Hallmark?

So pre-production starts tomorrow on GD5: Roux The Day and it occurred to me that some of you may have questions about…

The new Gourmet Detective is going into pre-production, and star Dylan Neal is pretty thrilled.  What we already know is that Dylan and his wife and writing partner, Becky Southwell, had already written a script for Roux the Day–just a month after announcing that Hallmark canceled the series. They waited a long time until they got the green light and now everything is happening very fast.  Dylan asked Facebook fans if they had any questions about the series, and he personally answered each one. Although most fans shared their appreciation for the entertaining mystery series, some also asked questions.

One fan wanted to to know the time frame of getting a Hallmark movie completed. Dylan Neal explained that it starts out with three weeks of pre-production. After that, they spend the next three weeks actually shooting the movie. Afterwards, it is post-production, which Dylan says usually takes “several months.” But, he admitted, “sometimes [it] has to be cranked out very fast in a few weeks for scheduling reasons.”

Fans who wanted to know if the original gang including Brooke Burns (Detective Maggie Price), Matthew Kevin Anderson (Munro), Marc Senior (Bailey) and Samantha Ferris (Captain Forsyth) will be happy to know that the whole gang will be back. In addition, Bruce Boxleitner will be back as Henry’s dad. Dylan specifically wrote the part with Bruce in mind, hoping that the Cedar Cove actor would be all in.  Bruce agreed to join the series and he is back!

When Dylan and Becky sat down to create the series, they used the Gourmet Detective novels as inspiration. Although Peter King, the mystery author is given a writing credit for each movie, the husband and wife writing team worked to create their unique story. Dylan shared that “the main priority for us was to create a world with recurring characters somewhere in the United States, with a Hallmark sensibility. We can’t afford to go to Europe for each movie and can’t afford most of the set pieces and action sequences that Peter’s books describe.”

Dylan also pointed out that in the book, the gourmet sleuth was quite a womanizer. That was hardly Hallmark-friendly! The couple choose San Francisco, because they were filming in Vancouver and Victoria, B.C.,  and the landscape is similar. Dylan revealed that had they filmed in Toronto, they would have moved the story to Chicago.

“Honestly, all we could keep was the great title and the central figure of a gourmet detective who helps solve crimes.”

Fans asked if Dylan could cook like Henry, and he said no. He is not even a foodie. Dylan is a talented actor and just looks incredibly skilled in the kitchen. He did think it would be great to include some of Henry’s recipes on the Hallmark site, in a food blog, like the fictional one on the show. Hopefully, the network will consider adding this feature, as Henry certainly cooks up some yummy sounding dishes.

As for the witty banter between Henry and Maggie, and Dylan says it starts out with the writing couple, Dylan and Becky. Dylan shared that “we love the relationship between Henry and Maggie and we make ourselves laugh as we’re writing. Not all the things that make us laugh can stay in the script but we really enjoy these characters – so glad you enjoy them as well.”

How does Dylan and Becky write the murder mystery part of the script? He shared that you start from the end and work yourself back to the beginning. And, in the case of this writing duo, you act out the scenes to see if they work.

” To some degree, you do work backwards in that you know who the killer(s) are to begin with. How you go from A to Z takes time to figure out and that’s what outlines and beat sheets are for. Lots of work goes into a script before you start writing dialogue in a murder mystery. You also have to work in nine act outs for a TV movie which makes it that much harder. Becky and I pride ourselves in having great act outs – at least I think so!”

Dylan Neal is also very hands-on with other creative details: “I’m very involved in all the creative decisions for this franchise – from casting, lighting, set design, props, costumes, art department – it’s even my writing that is on the murder boards in the police station!”

Before the first Gourmet Detective mystery,  he worked with the costume designer to create clothing looks for each character. This is why Henry always wears a vest. This is his “signature look.” And even if there are different costume designers in later movies, that “signature look” will remain. Those are the little details that make this mystery series very lavish and very visually interesting. No other series has the same sort of vibrancy.

When Will The Gourmet Detective: Roux The Day Air?

When should mystery fans expect to see Roux The Day on Hallmark Movies & Mysteries? Dylan shared that it will be early in 2020! Dylan mentioned January as a probable month, so Gourmet Detective fans should mark your calendars. The odds of a sixth episode is all in the hands of viewers.

Gourmet Detective fans, did you enjoy the little behind the scenes details about this Hallmark mystery series? Share your comments and be sure to check back with TV Shows Ace for the latest on this series and more. The Gourmet Detective: Roux The Day will air on Hallmark in 2020, possibly as early as January.

Could There Be A TLC Birth Special For Jessa Seewald’s Fourth Baby?
‘Bachelorette’ Preview: Katie Warns Clout-Chasers To Get The Eff Out
‘Bachelor In Paradise’: First Former Lead Heads To The Beach Looking For Love
‘Bringing Up Bates’ Sisters Bond Through Hard Times
Kim Kardashian Feeds Tiny Waist With Tacos In Lemon Yellow Bikini