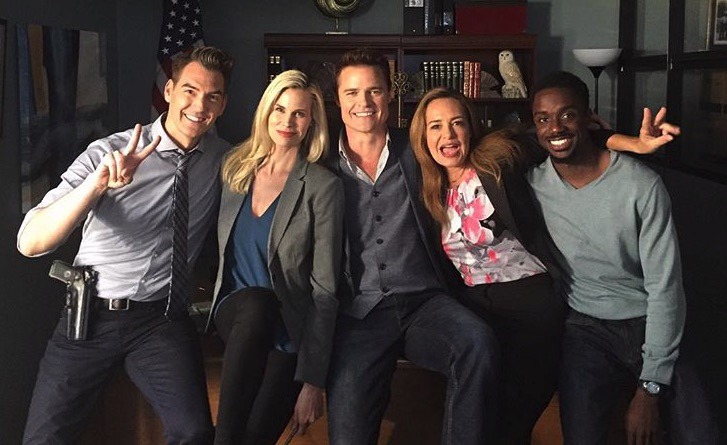 Back on August 29, 2018, Gourmet Detective star Dylan Neal went to Facebook to announce his latest Hallmark movie, Truly, Madly, Sweetly. He also took this opportunity to tell fans that the fourth installment of the Gourmet Detective series, Eat, Drink And Be Buried, was the final one for Hallmark Movies & Mysteries. He explained that he and Brooke Burns loved working together and both wanted to find another vehicle to work together.

“On another note, I know many of you are wondering if there will be any more Gourmet Detective movies coming and I’m afraid that the fourth installment was our last. While we had many fans, the network has decided to concentrate on their newest franchises and I wish them all much success. Brooke and I love working together, as does the network and we’re looking for something else that we can star in together – so I don’t think you’ve seen the last of us together just yet…

😉 Thank you all for your support of the Gourmet Detective family (it really was a family affair), we had a great run and it was a real pleasure bringing these movies to you.”

Dylan wrote a lovely goodbye post. He seemed sincere in his love of the Gourmet Detective and the crew. Fans of the series thought this was the end. That is, until it wasn’t.

Could The Gourmet Detective Return?

On May 22, Jorie, the Joyful Tweeter posted her joy of seeing Truly, Madly, Sweetly and tagged Neal. Dylan Neal thanked her and also mentioned that he wrote and produced the Gourmet Detective series. Another fan, Heidi McK asked if he will be doing any more of the mysteries. Dylan wrote, “Fingers crossed Heidi…,” giving fans hope that this may mean that Hallmark is reconsidering their cancelation of the show.

Does this mean that fans could see new Gourmet Detective episodes? Hallmark has not indicated anything. We only have Dylan Neal’s tweets to go on, but this looks promising!

This is the right time to release more episodes of the Gourmet Detective. Now that Garage Sale Mystery is canceled, they are rearranging the schedule. They have moved up Aurora Teagarden and her murder club group’s three episodes from September to August. Normally, Garage Sale Mysteries airs four mysteries in August. Since the cancelation, they have deleted everything from the Hallmark website and do not air GSM repeats.

Now, the mystery channel continues to air other series repeats. The Gourmet Detective is one of the featured mysteries, along with Aurora Teagarden, Chronicle Mysteries, Morning Show Mysteries, Emma Fielding and a cornucopia of new series.

It appears that Hallmark is reconsidering all of their options. While the Flower Pot Mysteries, starring Brooke Shields, and Murder She Baked, starring Alison Sweeney, do not appear to be filming any new episodes, Dylan and Brooke seem to be the most ready to reprise their roles as Henry and Maggie.

Right now, Flower Pot Mysteries star Brennan Elliott is busy starring in the Crossword Mysteries, along with his All Of My Heart costar, Lacey Chabert. Brooke Shields is starring in the new CW Glamorous pilot. If Glamorous goes to series, it does not appear that the Flower Pot Mysteries will return anytime soon. Of course, the always busy Alison Sweeney is starring in her own mystery series, the Chronicle Mysteries. Murder She Baked is indefinitely put on the back burner.

Does this mean the Gourmet Detective could return to Hallmark Movies & Mysteries?

Tune in tonight at 9/8c for another brand new Gourmet Detective movie on @hallmarkmovie pic.twitter.com/kfZ1z781hi

Gourmet Detective Is Based On A Book Series

The Gourmet Detective is based on the Peter King mysteries of the same name. King’s DNA is a bit like James Bond. He is a retired metallurgist, a Cordon Bleu-trained chef, and was lead rocket designer that helped get Apollo to the moon. His detective, Goodwin Harper, is a chef turned culinary sleuth. He has a refined palate. The tidbits of obscure food knowledge sprinkled in the cozy series is intoxicating!

Dylan Neal adapted the series of mysteries for Hallmark. First, he moved the location from London to San Francisco. Next, he added a main female character, played by Brooke Burke. In the books, the Gourmet Detective encounters a bevy of sultry women in the same fashion that James Bond does. Instead of casinos and shaken martinis in exotic locations, he encounters captivating ingenues in fine eating establishments, wineries and exclusive dinner parties. By added the elegant Burns to the adaption, there is a ample opportunity for a Moonlighting sort of romance–and it succeeds. Neal and Burns have a lot of chemistry.

Are you hoping that the Gourmet Detective returns? Please share your comments and make sure to check back with TV Shows Ace for the latest with Hallmark news.