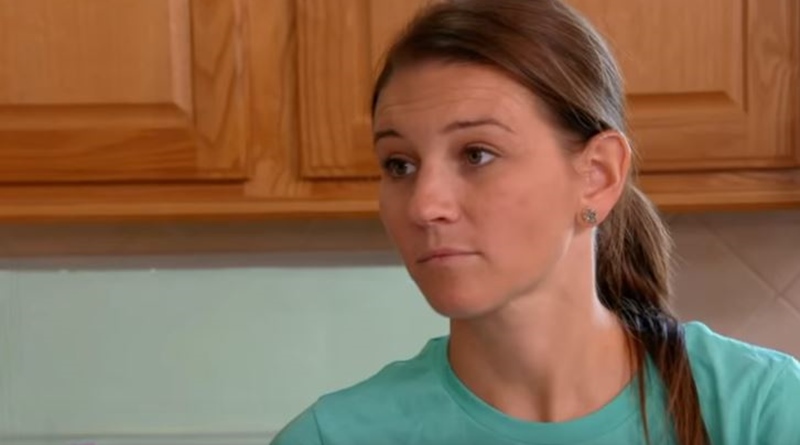 OutDaughtered fans got worked up with Adam Busby when he got a little Frenchie dog for the kids’ birthday. Danielle didn’t want a dog, and some tensions arose. Critical fans said it demonstrated Adam not listening to his wife. But, it turns out that little Beaux decided she’s his favorite. Certainly, it looks like she’s formed a special bond with the cute pooch.

The quints and big sister Blayke Louise all loved the little dog. These days, they call him “Bo-Bo.” Actually, sometimes he’s also a handy excuse for Riley’s mischief. TV Shows Ace reported this week that Riley got caught cutting her own hair. Somehow, she tried to pass the blame onto the dog. Plus, we often see Hazel enjoying a cuddle with the little fellow. So, it seemed despite Danielle’s objections, he’s generally a hit.

And, it seems that Danielle’s the biggest hit of all with Beaux-dog. The OutDaughtered mom took to her Instagram Stories late on Wednesday and shared a cute picture of Beaux. It showed him in the bathroom. She captioned it with, “Hi. I’m’ Beaux. I love my mommy. When she gets in the bathtub…I sit right there next to her.” She used a fun hashtag – #AWKWARD. And, in the pic, we can see his adoring little face looking at her. (Well, we luckily can’t see Danielle, but we get the picture).

While Adam got the dog for the kids, every mom knows the parents end up being the real owners of such gifts. Meant for the kids, it seems Bo-Bo spends a lot of time with Danielle. Certainly, though she might be his favorite, she looks to have a soft spot for him these days. Danielle shared a few other shots of him. In one picture, she’s cuddling the dog close. The OutDaughtered mom captioned it with, “It’s National Dog Day and this little pup won my heart the second he come through our door. Though I wasn’t ready for the responsibilities of a pet again… dang it! I’m obsessed with this #frenchie named Beaux ❤️ Who else is a dog mama out there?”

Fans responded to the post, and most of them were very approving. One fan said, “Well I’m watching the new episode and let me remind you you were not so happy when he first came through the door 😂😂😂.” Another fan of the little dog wrote, “Watching the new episode! Love Beaux he’s adorable 💙.”

It’s National Dog Day and this little pup won my heart the second he come through our door. Though I wasn’t ready for the responsibilities of a pet again… dang it! I’m obsessed with this #frenchie named Beaux ❤️ Who else is a dog mama out there?? #nationaldogday #dogmama #itsabuzzworld #beauxbuzz

What do you think about Danielle growing to love Beaux-dog so quickly? Do you think he’s the cutest little fellow, who obviously decided Danielle’s his favorite? Sound off your thoughts in the comments below.