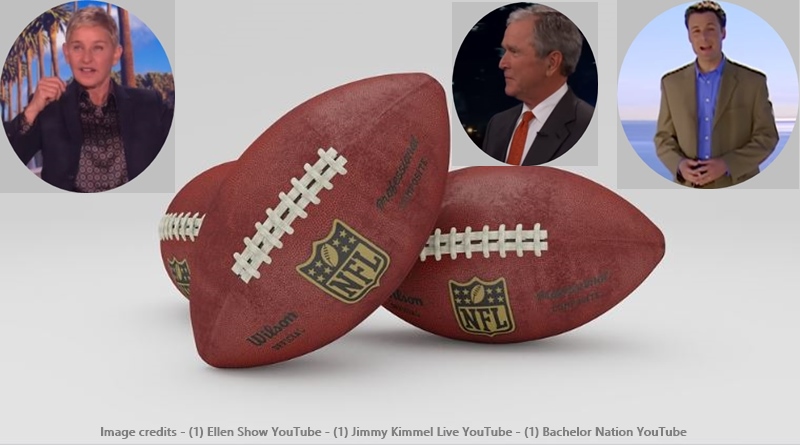 Chris Harrison of Bachelor Nation met up with Ellen DeGeneres at a Cowboys game. And, yes, that’s an odd place to be seen for Ellen. After all, she’s not a Cowboys fan. But, she said she went because the Dallas Cowboys owners, the Jones family invited her. She puts it as “keeping up with Joneses.” Oh, and she was there with ex-President Bush. Of course, Ellen’s take on it was hilarious and she’s got a message about tolerance.

Chris Harrison took to Twitter about Ellen and ex-President Bush

Over on his Twitter account, Chris Harrison shared that he spent time with Ellen at the Cowboys game in Dallas. His tweet read, “I happen to have been in the suite with @TheEllenShow and President Bush Sunday at this game. I like and respect them both. It wasn’t necessary but I love how Ellen eloquently spoke out on this. Only issue, I gotta get her to be a @dallascowboys fan!” Chris also shared a clip of Ellen describing what happened that day, and naturally, she’s extremely funny.

Ellen describes how she ended up silently cheering for the Green Bay Packers, as she’s a friend of Aaron Rodgers. In fact, as she put it, she “had to hide [her] cheese hat in Portia’s purse.” Also, she explained that she kept some very exclusive and “fancy” company in the stadium. Note, she said, “not fancy like Real Housewives fancy.” No wonder Chris Harrison commented about Ellen. One can imagine how much good fun it must be to get out with her and her sense of humor.

Keeping up with the Jones family explained by Ellen

Ellens says she “never goes out.” On that, she noted she’d rather go to Wendy’s via the drive-thru so she “only has to see one person.” But this time, she did go out. It happened because “Portia and I were invited by Charlotte Jones.” Ellen explained, “she’s the daughter of Jerry Jones who owns the Dallas Cowboys.” And then she says, “we went because we wanted to keep up with the Joneses.” Plus, Ellen knows the Bush family and described them as friends. George sat next to her in the suite. So, it looks like Chris Harrison also got to keep up with the Jones family, as he was there as well.

But, apart from the laughs, Ellen also delivered a message about being kind because we’re all different. Ellen noted that when someone took a photo of her with George Bush, Twitter went into overdrive. The comedian noted that “people were upset,” asking, “why is a g*y Hollywood liberal sitting next to a conservative Republican president?” But she said that we should all be nice to each other, as “we are all different.” In fact, one tweet she liked a lot said, “Ellen and George Bush sitting together makes me have faith in America again.” Ellen shared that we forget that it’s okay to be different. We can still like each other.

I happen to have been in the suite with @TheEllenShow and President Bush Sunday at this game. I like and respect them both. It wasn’t necessary but I love how Ellen eloquently spoke out on this. Only issue, I gotta get her to be a @dallascowboys fan! https://t.co/POgDUNaAm2

What do you think about Ellen and her hilarious take on the outing with George Bush and Chris Harrison to the Cowboys’ game? Did you enjoy her saying they went to “keep up with Joneses?”  Sound off your thoughts about tolerance in the comments below.

Remember to check back with TV Shows Ace often for more news about Ellen DeGeneres, Bachelor Nation, and Chris Harrison.